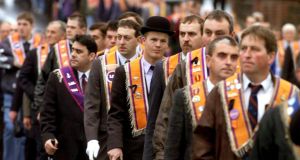 Orangemen on parade in Portadown in 1999. File photograph: Paul Faith/PA

The Orange Order suggested a new commission intended to rule on contentious marches in Northern Ireland could be given a role in monitoring traffic arrangements outside GAA grounds.

The proposal was intended to address the perception amongst unionists that the new Parades Commission would concentrate unfairly on Protestant cultural events.

In a confidential note dated August 7th, 1997, senior Northern Ireland Office (NIO) official SJ Leach discusses a possible expanded role for the commission. The official says such an expanded remit would “address the Orange Order concern that the new arrangements will unfairly concentrate only on the physical manifestations of Protestant cultural identity (ie marches) without addressing aspects of nationalist cultural expression which may be offensive to unionists”.

The note, declassified with other files from 1997 in Belfast today, points out that in the run up to that year’s Drumcree parade the Orange Order had suggested that “to redress the balance” the commission could look at other events.

“The example quoted at the time concerned traffic control arrangements around GAA matches, which (according to the Order) are often left in the hands of the GAA themselves, so that Protestants driving by feel intimidated when they are held up for considerable periods, by stewards whom they often regard as active republicans, while the last spectators are admitted to the ground.”

The UK government did not accept the proposal.

Although some individual Orange lodges did co-operate with the commission, the Order’s leadership boycotted the organisation for many years after its creation. In 2010 a blueprint for a replacement for the commission – which emerged from talks between the Stormont parties – had to be abandoned after the Orange Order deemed it unacceptable.

Other files released today show a direct intervention by the Queen was suggested by the influential Presbyterian minister Roy Magee to ease tensions surrounding Orange parades.

The Reverend Magee was one of the members of the newly formed parades commission, but he told NIO civil servant Chris Maccabe that he was “working in a personal capacity on a bold plan that just might resolve the parades issue”.

Reverend Magee, who helped broker the loyalist ceasefire, gave Maccabe a letter addressed to the Northern Ireland secretary Mo Mowlam containing a statement to be issued by Buckingham Palace “which just might cause the loyal institutions to respond positively.”

The proposed statement read: “Her Majesty Queen Elizabeth the Second, recognising the loyalty displayed by many of the people of Northern Ireland, calls upon ALL her loyal subjects to acknowledge the political, social and economic dangers inherent in what has become known as the ‘Parades Issue’, and would exhort them to take such steps as necessary to avoid confrontation, such action will be deemed in no way as a capitulation of faith, or a weakening of their civil and religious liberty, but in her eyes would reinforce the deep affection held by her for her subjects in Northern Ireland.”

Reverend Magee thought “something of this nature would provide the necessary support for those in leadership in the Orange Order etc. Might make objections to their decision difficult. I accept that such a measure may appear unusual, but I believe something dramatic is required”.

Passing the letter on to the Northern Ireland secretary, Maccabe described the plan as “certainly bold and not without its attractions.” However, he acknowledged “the proposed involvement of Her Majesty seems to go far beyond the bounds of constitutional propriety. And for this reason alone. I’m sure it is a non starter.”