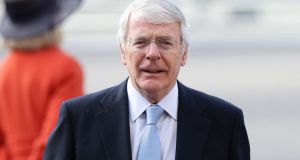 A letter from Downing Street to the Northern Ireland Office stated that John Major ‘would certainly not wish the government make a formal expression of regret’. Photograph: Yui Mok/PA Wire

Former British prime minister John Major disagreed with his secretary of state for Northern Ireland that there should be any public admission of “regret” over Bloody Sunday.

Patrick Mayhew was “distressed” at Major’s refusal to sign a letter to John Hume expressing regret on the 25th anniversary of the British army’s killing of civilians in Derry’s Bogside, newly declassified files show.

A memo in February 1997 to Major from his private secretary, just released into the British archives in London, shows Hume was seeking a meeting with the prime minister, along with families of two victims.

The then Social Democratic and Labour Party (SDLP) leader “made fairly clear that this was part of a struggle between the SDLP and Sinn Féin for control of the Bloody Sunday movement”, the memo states.

Mayhew had also asked for Major to write a letter to Hume expressing “profound regret” for what happened in the Bogside on January 30th, 1972, arguing it was different to apologising “which would effectively accept responsibility and open the door to calls for prosecutions”.

Advising the prime minister, his private secretary and diplomatic adviser John Holmes – now chair of the UK’s electoral commission – described the mass killing as “an inglorious episode, which we genuinely can regret”.

“But the politics of saying so are not straightforward,” he added.

“True, it gets easier as we get further away in time from the event,” but, he warned, the distinction between an expression of regret and an apology “may not be entirely apparent to the great British press”.

“There is an obvious risk of headlines about U-turns, apologies and sops to nationalists,” he told Major.

Among other considerations, he said there was a “probability” of being “faced soon with more evidence” from the families or the Irish government and “if we are going to edge in their direction, it could make more sense to do it then rather than move now and having nothing left to offer later”.

Holmes suggested, instead, that Mayhew meet the families but “essentially in sympathetic listening mode”.

In a hand-written note on top of the memo, Major wrote: “I am not at all attracted to this. It’s got big downsides and small upsides. We’ll discuss next week.”

Some days later, Downing Street wrote to the Northern Ireland Office agreeing to Mayhew meeting with Hume and the families, but said “the prime minister is not immediately attracted by the idea of being drawn further down the road towards ‘apologising’ for Bloody Sunday”.

“He sees more possible disadvantages in this than advantages,” the letter states.

The then Conservative party leader continued to have “reservations about this, not because regret was not a reasonable human response to what had happened, but because of what could be made of it publicly”.

Major “would certainly not wish the government make a formal expression of regret”, it added.

According to the file, marked confidential, a “clearly angry” Mayhew phoned Downing Street as he was “distressed” about Major’s “unwillingness” to sign a letter to Hume “regretting Bloody Sunday”.

The secretary of state thought this was “very important” and he was “sorry to see his carefully-considered advice rejected”. An expression of regret “could take much of the steam out of the issue”, he argued.

Mayhew proposed to say to Hume and the families that he “greatly regretted what had happened” on the day. After the call, Holmes warned Major: “I fear it will not be easy to stop Paddy using the word ‘regret’ in talking to John Hume.”

Holmes advised that this would be “liveable” as long as it was in the context of regretting all deaths and that Mayhew did not “make a public thing of it afterwards”.

In the note read by Major, a tick was penned over a suggestion that “Paddy use the word ‘regret’ in talking to Hume and the families, as long as it is in the right context”.

“We should not seek to make a meal of this publicly ourselves, although Hume would no doubt wish to tell the press what had been said afterwards,” Holmes said.

The meeting, in which Hume and relatives of the 14 people who were killed gave Mayhew a dossier of evidence and urged a fresh public inquiry, went ahead on February 14th that year.

While Mayhew expressed regret, he caused outrage and disappointment among relatives the following day when he said there would be no official apology or new inquiry.

In June 2010, then prime minister David Cameron eventually apologised on behalf of the British government for Bloody Sunday, following the publication of the Saville report into the killings.