British officials were sceptical of North-South free trade zone with US, files show 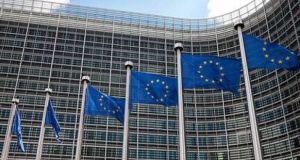 British officials were highly sceptical of proposals from Irish-America for the creation of a North-South free trade zone with the United States, encompassing much of Northern Ireland and the border counties.

Supporters of the zone, including the SDLP, Sinn Féin and leading Irish-American politicians, claimed it could create an extra 15,000 jobs. However, briefing notes for Northern Ireland Office ministers drawn up in January 1997, and declassified this week, point out that “creating such a zone as proposed undoubtedly faces very major legal and practical obstacles”. These included the fact that the European Union had “sole competence to negotiate free trade agreements with non-EU states”.

An internal message from Donald Alexander at the British embassy in Washington in September 1996 comments “it seems clear that the Free Trade Zone idea will run a bit further here with its erstwhile supporters having little thought or interest in the practicality of the idea so long as it serves for the election. John Mackey of [Republican congressman Ben] Gilman’s office will see to it that anything that moves, however daft, will have MacBride tacked on to it.”

A note from an official at Northern Ireland’s department for economic development, also in September 1996 says that “everybody – USDOC [US Department of Commerce], the EU, the DFA [Department of Foreign Affairs] in the Republic, DTI [Department of Trade and Industry], the FCO [Foreign and Commonwealth Office] (including the Washington embassy) – all agree that the idea is a non-starter; and that the US, Republic of Ireland and EU are not likely to say so very forcibly in public because they do not wish to appear too negative or to be rubbishing a well-intentioned, even if misconceived, proposal”.