The Brexit amendments: What the UK parliament is proposing 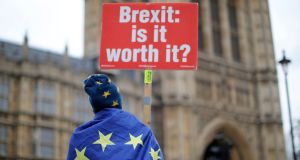 Any successful amendments will not have the force of law, but will carry heavy political weight as a signal to Downing Street and Brussels of what kind of Brexit MPs are likely to approve. Photograph: Tolga Akmen/AFP/Getty Images

The House of Commons is due to vote on Tuesday on a series of amendments relating to the Brexit process.

This follows the defeat by 432 votes to 202 earlier this month of the withdrawal deal secured by prime minister Theresa May, and procedural moves by backbenchers ensuring that MPs got the opportunity to vote on amendments proposing other options.

There are 19 currently submitted, including some amendments to amendments. However more can be submitted up to 10.30pm on Monday, and the Speaker of the House of Commons John Bercow will then select a smaller number - expected to be in the range of four-to-six - on which MPs will vote on Tuesday evening.

The British government’s tactics are also unclear. We do not yet know if the government is tabling its own amendment or whether it will encourage its MPs to back one of the anti-backstop amendments.

Any successful amendments will not have the force of law, but will carry heavy political weight as a signal to Downing Street and Brussels of what kind of Brexit MPs are likely to approve. Here are some of the most prominent amendments and the view the Irish Government is likely to take of them:

1. Grieve and Cooper amendments: In a bid to prevent a no-deal Brexit, the cross-party backed proposal from Conservative MP Dominic Grieve would effectively wrest control of Commons business from the government for six individual days in the run-up to the UK’s scheduled withdrawal date of March 29th with the intention of getting MPs to reach a consensus on how to handle it.

In a similar vein, a move by Labour former minister Yvette Cooper, supported by Tories such as Nick Boles, calls for a vote on a Bill that would give parliament control over the Brexit process if Mrs May fails to secure a deal by February 26th. MPs would get a vote on extending Article 50 to the end of the year and preventing a no-deal exit under the terms of the Bill. The Labour frontbench has been publicly flirting with throwing its weight behind the amendment.

Irish view: As pressure grows on Dublin over its preparations for a possible no-deal at the end of March, the Government will welcome any move which stops a lurch towards a no-deal Brexit. The Government here would also hope that more discussion in the House of Commons might move the UK’s approach towards a softer version of Brexit, given the fact most MPs favour this outcome. An extension to Article 50 would be welcomed by the Government to avoid a no-deal.

However Irish Ministers and officials are also conscious that this could also prolong the uncertainty. The debate in the UK also seems to take for granted that the EU would agree to an extension of Article 50 and thus a delay in the UK’s exit date. It probably would, but only if presented with a clear reason to do so and and the EU side may seek certain conditions on an extension.

2. Brake on the backstop: Senior Conservative figures , including 1922 Committee chairman Sir Graham Brady and former minister Andrew Murrison want a deadline of the end of December 2021 put on the backstop proposal intended to avoid a hard border in Ireland.

The amendment is believed to be viewed favourably by Downing Street as a way of showing Brussels that the withdrawal agreement could get through the Commons if concessions are made regarding Northern Ireland. Another amendment from the same two MPs seeks that the backstop is “replaced with alternative arrangements to avoid a hard border”, though it does not say what these alternatives might be.

There are also proposed amendments calling for a six-month limit on the backstop or a right by the UK to exit it unilaterally.

Similarly, the EU has indicated it would be prepared to reexamine the issue if the UK changed its red lines – for example, as the Labour Party has called for, committing to remain in a customs union and aligned to single market regulations.

However if, on the basis of a Commons vote, Mrs May just requests that the backstop be dropped or time-limited then the answer will be ‘No’ and the uncertainty will continue. Irish Government sources were clear on Monday that both Brady and Murrison amendments in their current form were a non-runner.

3. No to no-deal: A cross-party effort headed by Tory Dame Caroline Spelman has widespread support and rejects the UK quitting the EU without a withdrawal agreement. This would probably be more palatable to Mrs May’s government than either the Grieve or Cooper bids for MPs to take back control.

Ireland’s views: Ireland supports the withdrawal agreement so this approach would provide some comfort. However, the House of Commons still has to agree on a way forward if a no-deal exit is to be avoided. Just deciding that it should not happen will not be enough. “We are still at the stage of Westminster negotiating with itself,” said one Irish Government source.

4. Labour’s twin track approach: This calls for MPs to be able to vote on options to stop a no-deal exit, such as a customs union with the EU, as well as the possibility of a new Brexit referendum. Labour leader Jeremy Corbyn, however, has been careful not to commit his party to officially back a second poll.

Amendments have been tacked on to the Labour “options” proposal, with the Liberal Democrats calling for Remain to be on the ballot paper in any referendum, while Labour backbenchers want parliament to legislate for a public vote. Separately, the chairman of the Exiting the European Union select committee Hilary Benn wants a series of votes on various Brexit options to see where the most support lies.

Ireland’s view: For Ireland, the prospect of a second referendum raises the possibility of the UK deciding to stay in the EU, clearly the ideal outcome for the Irish Government. However all sides say that the outcome of a vote cannot be taken for granted.

With a majority in the House of Commons seeming to favour a softer Brexit, any mechanism allowing a series of votes may point in this direction. However time is running out.

While Dublin may face difficult choices in the weeks, it now must wait to see what the House of Commons decides on Tuesday - and how this affects the British government’s position - before deciding how to proceed. - Additional reporting Guardian/PA