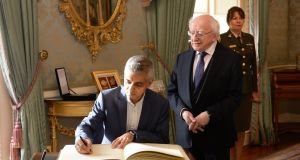 The UK could “sleep-walk off the cliff edge” with no deal on exiting the EU if Theresa May’s plan is rejected next week and she does not call off Brexit, London mayor Sadiq Khan has warned.

On a visit to Dublin, the Labour politician said he expected the UK parliament to reject Mrs May’s proposed Brexit agreement in next Tuesday’s vote and for his party then to call for a general election.

“We will have to wait and see if there are enough MPs to vote for that. If that doesn’t happen, the next best thing is a people’s vote,” Mr Khan said after addressing a business audience in Dublin.

The London mayor said a no-deal exit increased the chance of a hard Irish border.

A prominent pro-EU campaigner during the 2016 Brexit referendum campaign, Mr Khan wants to see a second public vote on the UK’s decision to leave the EU giving the people “a say in whether we accept the deal or no deal with the option of staying”.

“Now we know that the promises made in 2016 were a lie. Now we know what the terms of exiting the EU, either a bad deal or no deal whatsoever,” he told The Irish Times.

Mr Khan said he was “not a fan of ‘best of three or five’ referendums” – nor did he believe in “never-endums” – but he felt that the British public would take a different view on leaving the EU now and that politicians “shouldn’t be scared about the British public taking back control”.

“Now we know there isn’t the land of milk and honey outside the EU but actually the terms of exit aren’t great. The British public can now vote with foresight and knowledge on whether we are going to accept exit on the terms we have been given or the option of staying in the EU,” he said.

The British politician expressed concerns about the impact of a potential no-deal Brexit not just on London or the wider UK economy but on the European Union too.

“My worry is that we could sleep-walk off the cliff edge and leave the EU with no deal whatsoever. It is bad for London, bad for the UK and bad for Europe. That is why Theresa May should stop governing in the party interest and think about the country,” he said in an interview.

He declined to say whether Mrs May should resign if her deal falls at the parliamentary hurdle.

In a speech to the Dublin Chamber of Commerce, Mr Khan called on Mrs May to halt the country’s exit from the EU if she fails to get her proposed divorce deal from the EU passed by parliament.

The prime minister should, he said, withdraw the article 50 application taking the UK out of the EU on March 29th, 2019 if parliament rejects her deal, “which is looking extremely likely.”

“The very notion of a no-deal Brexit must be taken off the table by the British government. It is just too dangerous to leave as a possibility,” he said.

Withdrawing article 50 in the event of parliament rejecting her deal was “the single best way to guarantee that we avoid falling off a cliff-edge”, he said.

“It would stop the clock that is ticking towards a no deal Brexit and it would provide the breaking space to decide how we resolve this mess,” he said.

A no-deal exit was the “worst possible outcome”, he said, and this remained “a grave concern given the political uncertainty at Westminster”.

“This would not only be devastating for London’s economy but could actually hurt businesses across Europe, including here in Dublin, and increase the chance of a hard border on the island of Ireland, ” he said.

Mr Khan poked fun at Mrs May in his speech saying that she has as much chance of passing through parliament “as her securing the lead role in the next production of Riverdance”.

“And those of you who have seen those dance moves know exactly what I mean,” he said.