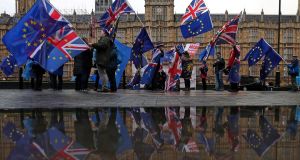 Pro-European Union (EU), anti-Brexit demonstrators wave Union and EU flags as they protest opposite the Houses of Parliament in London on December 3, 2018. Photograph: DANIEL LEAL-OLIVAS/AFP/Getty Images

Britain should be allowed to unilaterally revoke its departure notice from the European Union, an adviser to the European Court of Justice (ECJ) said on Tuesday, before a landmark ruling in the coming weeks.

The non-binding opinion for the ECJ comes as the British parliament begins five days of debate on prime minister Theresa May’s proposed Brexit deal with the EU before voting on it next Tuesday.

“Advocate General (Manuel) Campos Sanchez-Bordona proposes that the Court of Justice should declare that Article 50 ... allows the unilateral revocation of the notification of the intention to withdraw from the EU,” the ECJ said.

“That possibility continues to exist until such time as the withdrawal agreement is formally concluded,” it said in a statement, meaning Britain would have to notify the EU that it has changed its mind before Brexit day, on March 29th, 2019.

“The Advocate General emphasises that withdrawal from an international treaty, which is the reverse of treaty-making power, is by definition a unilateral act of a state party and a manifestation of its sovereignty,” the court also said.

“A member state which decides to withdraw is to notify the European Council of ‘its intention’ - and not of its decision - to withdraw, and such an intention may change,” it added. “It would be illogical to force that member state to withdraw from the EU in order to then have to negotiate its accession.”

The court, which tends to follow the advocate general’s opinion in its final decisions, did not give an exact date for the ruling but it is expected in the coming weeks.

Ms May has agreed an exit pact and an outline of future EU-UK ties with the other 27 states staying on together after Brexit. But the proposed accord still needs the endorsement of the British parliament, where it faces stiff opposition.

The other EU states, as well as the European Commission, want any revocation of Britain’s withdrawal notice to require the consent of the bloc, fearing that, otherwise, Britain or other would be leavers could use this tactic to win concessions.

Tuesday’s opinion rejects that argument but says that “good faith and sincere cooperation must also be observed” in any withdrawal of the exit notice.

The case was brought before the ECJ by Scottish politicians opposed to Brexit. They hope it could pave the way for a potential second Brexit referendum, giving voters the option to remain in the EU.

“That puts the decision about our future back into the hands of our own elected representatives,” said Jo Maugham, one of the lawyers involved in the case.

Both May and the EU have said that, if the British parliament votes this offer down, Britain would risk crashing out of the bloc with no deal in place to mitigate the damage. May says it would risk not delivering the Brexit that the British people voted for.

But the tentative deal is also opposed by advocates of a sharp break from the EU and she is struggling to get enough backing for it, even within her own party.

“Every effort is being made on both sides of the Channel to stop Brexit,” prominent ‘Leave’ campaigner Nigel Farage said after the ECJ statement.

Theresa May will on Tuesday appeal to MPs to back her Brexit deal at the start of five days of debate on the agreement, which is opposed by much of her own party as well as by the opposition. The prime minister will say that the deal respects the outcome of the 2016 referendum and will return to Britain control of its borders, laws and money.

“The British people want us to get on with a deal that honours the referendum and allows us to come together again as a country, whichever way we voted. This is the deal that delivers for the British people,” she is expected to say.

John Bercow, the Speaker, allowed Labour, the DUP and four other opposition parties to lay down a motion that will be voted on Tuesday, immediately before before the start of the five-day debate on the Brexit deal

The motion, submitted late on Monday, calls on MPs to find “ministers in contempt for their failure to comply” and is signed by the shadow Brexitsecretary, Sir Keir Starmer; the DUP’s Westminster leader, Nigel Dodds; and the Scottish National party, Liberal Democrats, Plaid Cymru and the Green party.

Attorney general Geoffrey Cox told MPs on Monday that Britain would have to remain indefinitely in the Northern Ireland backstop if negotiations failed to produce a free-trade deal that kept the Border open. Mr Cox was speaking after the publication of an overview of his legal advice to the government on Brexit, which followed a demand by MPs that they should see his full advice to the cabinet.

The attorney general said that the backstop would offer Northern Ireland’s traders a competitive advantage over traders from European Union member states, including Ireland, because they could trade freely in both the single market and the rest of the UK. He suggested that, if the backstop persisted beyond a short period, it would be subject to a legal challenge in the European Court of Justice on the grounds that article 50 of the EU treaty could not be the basis of a permanent arrangement with a non-EU state.

Dozens of Conservative MPs have said publicly that they would vote against the withdrawal agreement, along with the DUP and the opposition parties. But Mr Cox said that, when weighed against the alternatives to backing the prime minister’s deal, it was a risk worth taking.

“This represents a sensible compromise. It has unattractive elements, unsatisfactory elements for us. But the question for the House is to weigh it up against the other potential alternatives and to assess whether it amounts to a calculated risk that this government and this House should take in these circumstances,” he said. – Additional reporting Reuters/Guardian