Catholic and Protestant communities fought recession together, but integration is slow 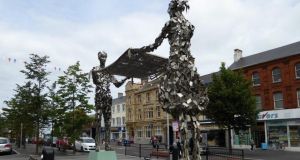 Lurgan is a place name that carries the weight of the past. It was infamous during the Troubles for being a town marked by deep divisions, with Catholics living predominantly in the north of the town and Protestants mainly in the south.

Today, to an outsider walking along Lurgan’s main street any divisions that remain are invisible. The town appears like any generic, modest, low-key market town in Northern Ireland, with stalls on the central median divider, selling flowers and fresh fish. There are familiar high-street shops: Boots, Heatons, Pound Stretcher. There are vape shops, barbers, and Chinese takeaways.

There is also a striking metal sculpture in the centre of the town, almost as high as the lamp-posts. If the purpose of a public sculpture is to make some statement about the community it’s located in, then Lurgan’s piece of public art is not subtle in its aim.

Named Linen Bleachers, in homage to Northern Ireland’s former linen industry, the sculpture depicts a man and a woman holding a piece of linen between them. They are connected to each other by this metal piece of fabric, which would fall to the ground without both holding onto a piece of it. The visual message is clear: in order to work together, they each need each other’s co-operation.

When you walk underneath the sculpture and look up, you can see an additional element. There are a score of aspirational messages punched out of the metal; the text of which were presumably written by members of the Lurgan community, as most of them are accompanied by sets of initials. These are three of them.

Where that statue is now, there used to be underground public toilets, back in the 1980s. That was the dividing line of the town

“Fail alone or succeed together. CC.”

Explore the interactive map below

“Where that statue is now, there used to be underground public toilets, back in the 1980s. That was the dividing line of the town,” says Wilson Freeburn. Freeburn has been a volunteer director at Lurgan’s Mount Zion House for several years. Mount Zion is a community facility that provides services ranging from office space for voluntary organisations to childcare and counselling.

Further up the street from the Linen Bleachers statues is a war memorial. “Between where that statue is now and the war memorial, that part of the street would have been a semi-neutral zone.”

Freeburn pauses. “That makes it sounds like a war zone, but Lurgan had become a very divided town in the 1970s and 1980s. There was a major shift in population. For instance, about 30 per cent of the population in the south of the city were Catholic, and when the civil unrest began they moved.”

Freeburn welcomes the fact that today “people move around in relative security and safety”. However, he points out that Lurgan has lost one positive initiative that came into the town during the Troubles. “We had Youth Training Programme schemes, which provided training and employment. I believe if these were brought back, the benefits would be very good. Those schemes gave back to the community; people did painting and decorating and gardening.”

On the wall outside Lurgan’s police station, is a sign that says “Welcome to the police station”, in four languages other than English. They are Russian, Polish, Portuguese and Lithuanian, and reflect the fact that Lurgan has become a multicultural community. The nearby Moy Park chicken factory is a large employer, where many of the town’s newcomers work.

Does Freeburn believe the arrival of new communities has assisted with the integration of Lurgan’s older communities?

“It’s like when the Irish went to America,” is how he puts it. “It takes time for cultural diversity to weave itself into the community.”

Charlie Gardiner was born and raised in Lurgan, and has been the chair of the Chamber of Commerce for over a decade. He doesn’t believe it is useful to acknowledge that sectarianism previously existed in the town. “I don’t talk about two communities coming together. I talk about two parts of the same community. To me, it’s critical to move forward. I serve the one business community of Lurgan.”

He laughs when asked how, as a child, he became aware of divisions in the community

Lurgan used to have two chambers of commerce; for some 10 years, as Gardiner recalls it. In 2005, “The two chairmen met and saw there was a lot of common ground, and from that, we formed one chamber. Commerce, community and churches are the way forward. We believe that what our businesses are sadly missing is civic pride and, as commerce is the servant of the community, we all have to be working together.”

Border in the mind

Gardiner grew up in the middle of the town, on High Street, at the height of the Troubles. He laughs when asked how, as a child, he became aware of divisions in the community. “The town centre was cordoned off. We had to go past a security barrier to get in and out of our house. That’s what I grew up with.”

The challenges of the recession helped, by creating a stronger business community. “Hardship does bring unity,” Gardiner says. “From a business perspective, everyone is faced with the same problems, and that unites people.”

“There was always a Border in your head, growing up in this town,” says a long-term resident of Lurgan, who doesn’t want to give his name. “You never know how people will misinterpret what you say,” he says by way of explanation. “Everything is political.”

Like Freeburn, he talks about the area where the statue of the Linen Bleachers now stands as being the perceived “dividing line” between where Catholics and Protestants shopped and socialised. “But a good bit of meat is a good bit of meat, and my mother sometimes went to the Catholic butcher instead of the Protestant one. In recent years, there is more of a crossover between the north and south sides of the town, so that even the places where people socialise and shop has become less important and less of an issue.”

He’s unsurprised that the residential communities located in north and south Lurgan have not integrated over time. “There’s a case for staying where you know. People don’t like change.”