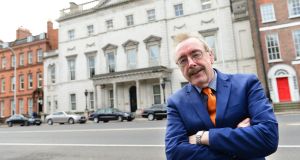 Ray Bassett: EU demand for a €60 billion payment from the British government is “one of the canaries in the mine”. Photograph: Dara Mac Dónaill

That, says Ray Bassett, a former diplomat turned critic of the Irish Government’s approach to Brexit, will be the clearest sign of how bad things could get for Ireland.

If the EU sticks to a demand for a €60 billion payment from the British government it will be a sign that things will get very bad indeed. It is, he says, “one of the canaries in the mine”.

“The Irish Government should scream and say: Look, let’s be realistic; let’s not put figures on it; let’s sit down and do a joint study with the British. But if you see the €60 billion coming in then our vital interests have been ignored.”

And that, he fears, is exactly what will happen – not just with the bill, but regarding the wider Brexit arrangements. There is, he says, a desire in the EU to “punish” the UK, and that will end up with Ireland being punished. He thinks we should wake up to the possibility that continued EU membership is no longer in Ireland’s interests.

Bassett retired from the Department of Foreign Affairs last October, after 39 years of service, finishing as ambassador to Canada. He was, he says, a DFA “lifer”.

That loyalty, however, now finds itself in conflict with his belief that Brexit changes everything for Ireland, and that we must now consider a future outside the EU. In Iveagh House, the palatial headquarters of the diplomatic corps on St Stephen’s Green, such a view amounts to heresy.

And for many former colleagues, Bassett’s heresy has been rather too public in recent months. A series of newspaper articles have riled the mandarins. He doesn’t mention it, but other sources observe that the department has asked that he cease referring to himself as a “former ambassador”.

A senior department source observes wryly that as Bassett’s critiques of Government policy on Brexit have become more pronounced, he has been elevated in media descriptions from “former diplomat” to “former high ranking diplomat” to “one of Ireland’s most distinguished diplomats”.

“I agonised for about a week before I published the first article. I didn’t want to publish it. Some of my friends in the DFA were saying, you’re completely right, we agree 100 per cent with you. But if you do this, you’re going to be a pariah.”

People in Iveagh House, he says, felt that publishing an article in Canadian newspapers (he has also published in the Australian press) “was a bit disloyal to my successor”.

But he persisted (and has published other pieces since) because of his experience in Canada during the crash, when he went around the place trying to “beg, borrow and steal” visas for young Irish people who had emigrated – the flotsam and jetsam of the bust.

He fears a similar effect on the Irish economy if his worst fears about Brexit come to pass. “I have kids myself, and I don’t want them to migrate.”

His view is grounded in a belief that Ireland’s relationship with the UK is more important than its membership of the EU.

“I’m preparing a policy paper saying that we should negotiate a bilateral deal with the British,” he says.

But that is not feasible from within the EU, as he knows.

“It isn’t doable within the current structure. So you have to go and negotiate. I think we should go to Europe and say we need to have these arrangements with the British. If you can accommodate us in a special arrangement with the EU, it would be great. If you can’t, let’s have the closest possible association with them.

“There isn’t a solution in the present framework, so the framework has to change. We really do need to preserve the arrangements we have in these islands.”

What bothers him, he says, is not so much that the Government isn’t doing this. It’s that it has never even considered it. It’s not that the Government weighed up what was in the best interests of the country and decided to cleave to the EU position; it never thought about doing anything else.

“The Department of Finance did economic projections of the effects of Brexit – but they never did an economic projection of maybe trying to negotiate a free trade agreement,” or else membership of the single market from outside the EU.

“I’m not saying it’s the right thing. But it might be worth looking at.”

“When I was on the management advisory committee, the board of Foreign Affairs, I would regularly ask questions about the EU. It was always slightly eerie. Nobody wanted you to ask questions,” he says.

“It reminded me almost of the days of the Catholic Church: that if you queried something, you weren’t quite sound, and people would say ‘maybe you shouldn’t be pushing that line’.

“I remember getting a briefing on the Lisbon Treaty and the people had come back from Brussels and said, ‘There’s absolutely nothing in this for Ireland – by the way, our position deteriorates because our influence is less’.

“I remember saying: ‘Why should we vote for it?’ And they’d say, ‘Well, you know, Europe has been very good for us, and what’s good for Europe is good for us.’ I said that’s fine and all, and then we had the Lisbon referendum and the day or two after it, people in government were wondering how to reverse it.

“And it seemed to me that there’s something not quite kosher about this, you know . . . people will not accept views that are different from their own.”

If that is true, it is hardly the preserve of the Department of Foreign Affairs. But his next charge is maybe more serious.

Bassett says that he advised that Ireland should strongly support the then British prime minister David Cameron’s attempts to negotiate a new relationship between the UK and the EU before the Brexit referendum.

“I thought it was madness what we did – row in with Juncker and all those people.”

The same mentality – following the EU line regardless of Irish interests – now threatens Ireland in the Brexit process to come, he believes.

Our interview takes place before the publication of the EU’s draft negotiating position last Friday. If anything, that document suggests that Irish interests are prominent in the EU’s approach to the Brexit negotiations, with specific and muscular language about the Common Travel Area, the peace process and the status of the Border. Credit for that lies substantially with Bassett’s former colleagues in Iveagh House.

But it is only the start of a lengthy and, for Ireland, perilous process. Nobody – neither Bassett nor the mandarins – is claiming vindication yet.