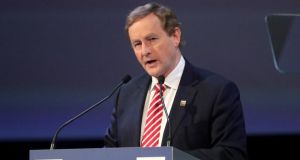 The first obstacle has been negotiated successfully.

The draft negotiating guidelines, which set out the European Union’s approach to the Brexit talks that will shortly begin with the UK, suggest the union will accept the continuation of the Common Travel Area between Ireland and the UK.

This has been a key aim of the Government since the UK referendum last year, and would preserve the rights of Irish people to travel freely, live and work in the UK after Brexit, and of UK citizens to do the same in Ireland.

The document also stresses the need to protect the peace process, which it says is of “paramount importance”, and says the “unique circumstances” in Ireland mean a return to a hard Border should be avoided.

The language used about Ireland, and the specific references to the Common Travel Area, the peace process and the Border were welcomed by the Government, which has mounted a sustained diplomatic and political campaign in recent months to have Ireland’s special interests reflected in the document.

This is not, by any stretch of the imagination, mission accomplished. But if the realistic aim of the Government is to minimise the negative impact of Brexit by achieving a recognition by both sides in the negotiations that there is an obligation to make provisions that take account of Ireland’s special requirements, north and south, then some necessary steps have been taken this week.

Both Taoiseach Enda Kenny and Minister for Foreign Affairs Charlie Flanagan welcomed the language in the document circulated on Friday, with Flanagan highlighting the fact that it reflected months of diplomatic and political effort by Irish politicians and officials.

Combined with the letter from British prime minister Theresa May to Donald Tusk on Wednesday, and the article by Mrs May in The Irish Times on Thursday, it suggests both sides of the negotiations – the EU and the British – have Ireland’s special interests in mind.

What remains to be seen, however, is just how important the Irish position is to each side. Maintaining the Border, the peace process and the Common Travel Area as a priority during the negotiations and including them in the final agreement is now the task facing the Government and Irish officials.

There is a long, long road ahead. And even the best-case scenario – a close British relationship with the EU, including a zero-tariff free-trade agreement – is not without cost, and not without some sort of Border presence. But the signs are as good as they could be at this stage.

These draft negotiating guidelines will form the basis for the EU’s opening position in the Brexit negotiations. They will be fleshed out by diplomats and political teams in Brussels and in the member state capitals over the coming weeks, and will be adopted at a special summit of EU leaders in Brussels at the end of April.

Full negotiations are likely to start in May or June.

Nobody in Dublin is getting carried away, and even though the Government can’t or won’t admit it, Ireland’s ultimate power to influence the outcome may be severely limited. But the last week has seen the successful conclusion of the first phase of Brexit.