Derry: a city with two names and two communities 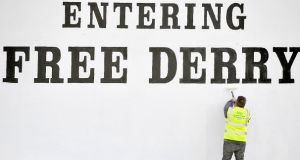 Derry is a city with two names and a place which the map shows has two distinct main communities.

The population changes in the map illustrate how the Protestant community was largely seen to have moved from the west to the east of the city, crossing the waters of the Foyle, during the decades of violence of the Troubles.

In 2013 the city made history in being chosen as the first ever UK City of Culture. It hosted a year-long celebration attracting international visitors.

In the same year it became the first northern venue to host the all-Ireland fleadh cheoil.

Despite its divisions Derry has forged important cross-community links and led the way in comparison with cities such as Belfast when it came to brokering deals on issues such as controversial parades.