What exactly does it mean to be ‘Northern Irish’? 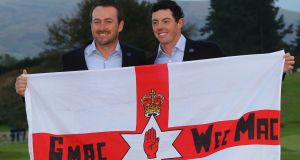 As with much of the present day discussion on the Northern Irish national identity, its first mention by the Peace People in 1976 shows enthusiastic optimism, unfettered by the restrictions of evidence.

The Northern Irish identity was barely mentioned again for another decade until some surveys began collecting data on its popularity.

When the results of the 2011 census (the first to contain this identity option) were published, the fact that almost one half of the population felt at least partially Northern Irish received considerable media attention.

It was taken by many as an indication of a deep psychological change towards a post-conflict identity, associated with a young, enlightened urban middle class that were keen to emphasise that “we are all the same”.

But new national identities are extremely rare, and this one has sparked myths.

There is little evidence that the Northern Irish identity is increasing in popularity in any substantial way.

In surveys carried out between 2001 and 2008 there was a large rise in the proportion of young Protestants choosing to identify as Northern Irish, however this trend has now largely ended.

But there is evidence that there is a lot more reporting on this identity in the media, particularly since the 2011 census.

This may be one factor explaining the perception that the Northern Irish identity is becoming more common.

The prevailing stereotype suggests that the Northern Irish are primarily middle class and tend to live in and around more cosmopolitan areas.

Although those who identify as Northern Irish are in theory more inclined to vote for the centre, in reality most do not, and the difference to British and Irish identifiers is very small.

For example, while 4.2 per cent of those identifying as Irish or British say they are most likely to vote Alliance in a general election, the figure is a mere 11.6 per cent for Northern Irish respondents.

Even those who identify as Northern Irish are not entirely certain of its meaning, although it is associated with more conciliatory attitudes towards those of the other main religion

The latest Life and Times survey (ARK, 2015) also shows that those who are Northern Irish are still more likely to consider themselves nationalist and unionist than neither.

So what does the Northern Irish identity mean? Now that the common narratives have been tested to destruction what can we say about this new identity?

Even those who identify as Northern Irish are not entirely certain of its meaning, although it is associated with more conciliatory attitudes towards those of the other main religion.

Someone can claim Northern Irishness while still being entirely Irish, but emphasising that they are from the North.

Similarly, someone who feels entirely British can claim this as a UK regional identity in the same way as someone from England, Scotland or Wales.

Whatever the validity of any of the claims that have been built around the Northern Irish identity – and in spite of having no clear unique culture, flag, passport, anthem, language, shared history, currency, traditions of state, or any of the other usual trappings of national belonging – the Northern Irish identity is not going away anytime soon, and political representatives could do well to move to acknowledge this new and highly unlikely constituency.

We need to better understand the Northern Irish identity, though no analysis should diminish the genuine pride a considerable section of society here feels towards the strange and beautiful place in which we live.

Kevin McNicholl is a post-doctoral research assistant at Queen’s University Belfast who has researched the Northern Irish identity.