Being Taoiseach ‘takes up every hour of your day’, Kenny laments

Enda Kenny reflected on his role as Taoiseach and defended the achievements of the Governments he has led. He spoke at the launch of The Irish Times Nealon’s Guide. Video: David Cochrane 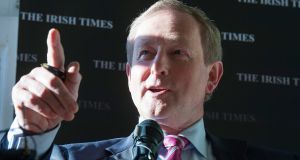 ‘I’ve learned that people actually own you in a very different way than you might ever imagine’: Taoiseach Enda Kenny. Photograph: Dave Meehan

Taoiseach Enda Kenny was early Wednesday continuing to keep people guessing about whether he will announce his immediate departure as leader of Fine Gael at a parliamentary party meeting this evening.

Mr Kenny has promised to address the issue of his leadership at the meeting which starts after 5.30 pm.

On Tuesday night, he was in pensive mood as he spoke at a book launch in Dublin, saying: “From my experience of this particular job, it takes up practically every waking hour of your day, and I’ve also learned that people actually own you in a very different way than you might ever imagine.”

Criticising those who have “degraded and debased” politics by making false promises, Mr Kenny said: “Nobody has all the answers; and this Government doesn’t have all the answers but it makes an honest effort to get it right”.

Walking back from the launch of The Irish Times’ Nealon’s Guide to the 32nd Dáil and Seanad, Mr Kenny stopped and spoke to families lounging on the Merrion Square grass in the evening light of early summer.

Observing the Taoiseach in the Dáil and at the launch of the Nealon’s Guide yesterday, Miriam Lord described how Mr Kenny became “misty eyed” and looked away as his achievements in office were listed at the book launch.

But he also had the demeanour of a man thoroughly enjoying leaving everyone guessing about his intentions. He has said he will address the leadership issue at the weekly party meeting this evening, and has told his friends he will make an “announcement” yet has not said what that will be.

Speculation now centres on whether the Taoiseach will trigger the Fine Gael leadership contest this evening or will announce the future date when he will do so. Some of those who spoke to Mr Kenny in recent days believe the contest will begin in short order, but nobody is sure.

In recent conversations with colleagues and friends, Mr Kenny has remarked how Colm “Gooch” Cooper bowed out of his stellar inter counter career with Kerry while still near the pinnacle of Gaelic Football.

Even those in a very small grouping within Fine Gael urging Mr Kenny to stay on have accepted the end is nigh, but don’t know the manner of his departure. “He’s not going to follow my plan,” remarked one such party figure last evening following a conversation with the Taoiseach.

Ministers yesterday quizzed each other about their state of knowledge on Mr Kenny’s intentions. Unsurprisingly, they were as uninformed as everyone else. One figure who has sat around the Cabinet table with the Taoiseach since 2011 left his company in recent days without gleaning any information at all.

“We talked about everything - except the war!” the Minister said. A friend of Mr Kenny’s said the Taoiseach told him he will “hear about it on the radio”.

The ground rules for the contest to succeed Mr Kenny are still being fleshed out but plans are already in place for candidates to be compelled to sign a “fair play contract” to ensure a clean race.