Speculation that Taoiseach will stay on until late July 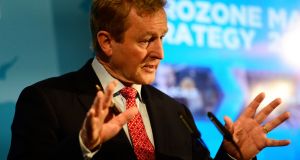 Speculation continues to grow that Taoiseach Enda Kenny will time the Fine Gael leadership election of his replacement to conclude just before the Dáil recess in late July.

Mr Kenny is expected to make a “significant announcement” this week at the parliamentary party meeting about the leadership but while many TDs and Senators expect the Taoiseach to set a date for standing aside at the meeting, that date may not be Wednesday night.

Keen Kenny observers suggest the Taoiseach is still reluctant to “release the hand of power” and would like to stay on well into the autumn and if he got to September he would then have to be there for the budget, staying on until the end of the year.

“The best solution is for the Taoiseach to announce he is standing down this week,” said one TD. But it would be “acceptable” to time his replacement for the summer recess.

“But he has to set the date this week. Any further delay would result in the tabling of a motion of no confidence. The motion would not be taken but it would be damaging for him,” said the party insider.

“The campaign has started, the two lads [leading contenders Minister for Social Protection Leo Varadkar and Minister for Housing Simon Coveney] are well into canvassing and there is no stopping the momentum .”

One Coveney supporter claimed “the Leo side are inflating their figures” for support and pointed out that most of the Cabinet have not declared for either camp. “They are all conscious of what happened the last time and many voted the wrong way,” the TD said of the attempted heave against Mr Kenny in 2010.

“They have learnt that a shut mouth catches no flies. And everyone wants to back a winner because they want to keep their jobs.”

Another TD believed there could be no move against Mr Kenny by either of the main contenders if it was to be an “orderly transition” by the end of the Dáil term. “Nobody would have an issue. You couldn’t stand up and say he has to go now.”

The TD added that neither Mr Coveney nor Mr Varadkar would want to lose votes of the significant number of the parliamentary party who still support the Taoiseach.

Another TD, a committed Kenny supporter, acknowledged that “he will have to say fairly definitively on Wednesday what he is doing”.

He added that “nobody actually knows what he will do and there’s a growing level of nerves.” He added that the Taoiseach will also want “to protect his image, his legacy. That means he will have to be definitive and not let it drag on.”

Other TDs pointed to the very active campaign teams of the two main contenders and “they have upped the contact with all party members”.

‘Not ruling myself out’

Minister for Education Richard Bruton kept himself in the mix by declaring on RTÉ’s Morning Ireland yesterday that “I’m not either ruling myself in or ruling myself out” for the party leadership.

“I’ve said consistently that until Enda makes a decision as to what he’s doing I’m going to continue to work as part of his team, delivering in my area. When he makes that decision I will make my position clear.”

TDs were divided about whether Mr Bruton would run. Any contender requires eight signatures. One said he would be surprised if he was running. It was reported that Mr Bruton was seeking the support of parliamentary party colleagues but a party member in regular contact said “he never mentioned the leadership to me”.

Another said “if he could get into the middle and come second in the first vote, he could win it. But it would be very difficult for him to come second because Simon and Leo’s campaigns have built up steam.

“Maybe he’s not running but just making sure he’s considered a very important person and he is top class, an excellent solid Minister.”

All TDs and Senators contacted said they did not know for sure what Mr Kenny would do.

“The one thing I do know though is he likes not to do what people think he’s going to do,” said one parliamentary party member. “He would like to attempt to surprise, or to do it on his terms.”