Protesters took to the streets of Dublin in a Right2Water staged event in Dublin on Saturday (8th April). 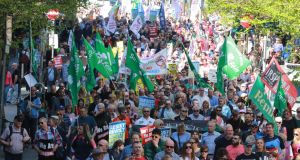 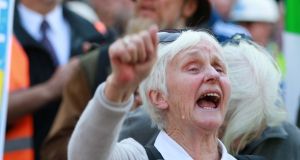 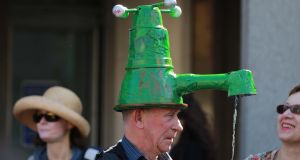 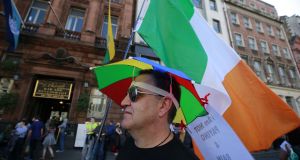 About 10,000-15,000 water charges protesters marched in Dublin on Saturday, in what some called the “final push” against the levies.

The demonstration came amid a continued deadlock between Minister for Housing Simon Coveney and the Oireachtas committee on water charges over the contents of the committee’s final report.

Protesters from across the State gathered at Connolly and Heuston train stations at about 2pm on Saturday.

Carrying placards and banners with such slogans as “Waterford and South Kilkenny Say No to Water Charges”, “Ballybeg Says No” and “Lough Garman Against Austerity”, the two groups marched along the north and south quays, before converging on Parliament Street and walking towards College Green, where speakers then addressed the crowd from a stage.

Unions at the event included Unite, the Communication Workers’ Union, the Technical, Engineering and Electrical Union, and Mandate.

Members of Sinn Féin, People Before Profit, the Social Democrats, Solidarity, the Communist Party of Ireland, and the Workers’ Party were also in attendance.

Chants included, “Labour, Blueshirts, Fianna Fáil - shame, shame, shame them all”, and, “Where’s Ross? He’s on the bus” - in reference to Minister for Transport Shane Ross.

One demonstrator, Pádraig Connolly, from Connemara, Co Galway, said he was on his 10th anti-water charges protest.

“I think this is a victory march,” he said. “A lot of people didn’t come today because they think it’s done.

“But I don’t trust these politicians, especially Fianna Fáil. But if they don’t abolish the charges, well, we’ll be back in our hundreds of thousands.”

Deirdre Baker, from Co Wexford, attended the event with her husband.

“I think this march is part of the last push. The Government needs to act now, finish this and stop taking the piss. What part of ‘no’ don’t they understand.”

In a speech to the crowd, People Before Profit TD Bríd Smith congratulated the protesters for their determination.

She ended her speech by quoting Pádraig Pearse: “And I say to my people’s masters: ‘Beware, Beware of the thing that is coming, beware of the risen people. Who shall take what ye would not give.’”

Solidarity TD Paul Murphy told the crowd that those in Government were mobilising to impose the charges in some form.

“They are mobilising because they don’t want to be beaten because water charges are strategically important for them.

“But they are also mobilising because they don’t want the lesson to go out that they can be beaten, that if we rise up together that we can win.”

Deputy leader of Sinn Féin, Mary Lou McDonald, said: “The position of Irish men and women has been, from the beginning, that water is a human right.

“We have won that argument . . . So to those in Fine Gael, or Fianna Fáil, or the Labour Party – if you remember them – who would lecture us about democracy, let’s say very clearly to them: ‘This is what democracy looks like.’

“Whatever the view of Simon Coveney, he has no option but to respect the democratic view of the people.”

Vera Twomey, from Cork, who is campaigning to have medicinal cannabis legalised, also addressed the crowd.

She said that since her daughter, Ava, began using medicinal cannabis last October, her epileptic seizures had reduced from 500 to three or four per month.

“The sisters and brothers and mothers and father that are looking for this medication, they need it now . . . A mother’s love is unyielding. That’s what kept us going.

“When we get tired and we get shagged out, we go back to Ava and she needs this and we need this. Simon Harris, there’ll be no stop until we get what we need for our family.”

Mike Fitzgerald, of the National Bus and Railworkers’ Union (NBRU), said the union’s dispute with Bus Éireann over the proposed imposition of cost-cutting measures was “so much more than an industrial relations dispute.

“There’s a message coming from Bus Éireann workers: ‘Shag off. You’re not going to do it to us.’”