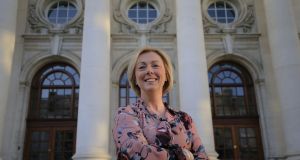 Fine Gael chief whip Regina Doherty has said her party’s past attempt to implement water charges was “a cock-up”.

Speaking on RTÉ Radio One’s Saturday with Claire Byrne show about the political row over the final report of the Oireachtas committee on water charges, Ms Doherty said Fine Gael’s attempt at introducing water charges was a “catastrophe”.

“I’m not blaming Fianna Fáil for the catastrophe that we made of this for the last number of years,” she said.

“I completely and utterly accept that what we put forward – how we put forward the particular policy that we wanted to put to the Irish people – was a cock-up.”

The current political dispute is centred on the report’s position on a charging regime for those who waste water.

Both Fine Gael and Fianna Fáil believe there should be a charge, but have differing views on how to penalise households that waste water.

Relations between the two parties have deteriorated in recent days.

Fianna Fáil has refused to negotiate with Fine Gael to break the deadlock on the report, following an intervention by Minister for Housing Simon Coveney.

Mr Coveney wrote to the Oireachtas committee on water charges outlining his concerns over the final recommendations contained in the report and their compliance with European law.

Meanwhile, Fine Gael TD Alan Farrell has been criticised for what was labelled as a “personal attack” on Fianna Fáil spokesman on the environment Barry Cowen.

In a post on his Facebook page earlier this week, Mr Farrell criticised Barry Cowen and members of Mr Cowen’s family.

“When you actually have to revert to being personal between two politicians of two political parties, I think you’ve lost the argument and I think that’s a pity.”

“I don’t like the idea of politicians referring to the families of other politicians,” Mr O’Callaghan said.

“Alan Farrell is perfectly entitled to criticise Fianna Fáil for its stance on water policy.

“But what he shouldn’t be doing is making personal attacks at people’s family.”