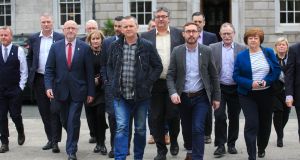 Minister for Housing Simon Coveney has been accused of threatening the Oireachtas committee on the future of water which is examining the issue of water charges.

Mr Coveney wrote to the chairman of the committee Padraig O’Ceidigh on Thursday evening warning the draft report produced by the committee, and opposed by the Fine Gael members, breaches European law and urging him to allow an expert in EU law to examine the contents before proceeding.

The letter has sparked an angry reaction from members of the committee including Solidarity TD Paul Murphy and Sinn Fein TD Eoin O’Broin.

He said: “Having lost the argument over an excess charge and the continued roll-out of domestic metering, Minister Coveney is now resorting to threats; the sub-text of this letter being that if he doesn’t get his way, he will force a general election.”

The letter was sent to the chairman and forwarded to all the committee members late on Thursday evening. In it Mr Coveney outlines his concerns regarding the lack of a charge for excessive usage of water.

He also asks why the committee reversed a previous commitment to install meters in every new build home?

The Minister said the European Commission has stated metering must be the basis for charging for excessive usage.

He wrote: “Not only does the new text drastically weaken our position in putting forward a coherent package to demonstrate compliance, it creates a clear inquiry between households with and households without meters.”

The draft report was due to be voted on Thursday but Fine Gael members have now sought legal advice from a European law expert before proceeding.

It is understood Fine Gael and Fianna Fáil are to make contact over the weekend in an attempt to rectify difficulties between the two.

Fianna Fáil is insisting it is a matter for the legislation to define the financial penalties householders will face if they abuse water.

The party believes the report should form the basis for the laws that follow. Senior advisers on both sides have been in contact to assess if there is a basis to proceed.

The committee meets again on Tuesday. Their draft report recommends refunds for householders who paid their water charges and proposes the funding of domestic water services through general taxation. It also proposes the installation of meters at apartment blocks.

The water conservation grant may be deducted from any repayments but the committee says this is a matter for Government.

Under the proposals, the metering programme will be abandoned, apart from bulk metering at apartment complexes. The report recommends giving incentives to householders who choose to install meters at their homes.

The report says the Commission for Energy Regulation will determine a figure for normal usage of water and penalties will apply to those who use 70 per cent above that figure.

However, the level of the financial penalties or how the money is collected has not been determined. It also provides for a referendum to keep the utility Irish Water in public ownership.