Golf dinner was inexcusable and shouldn’t have happened, says Minister for Health 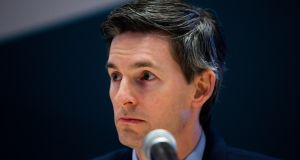 “I know that there will be people today who throw their hands up but I am asking them not to,” urged Dr Ronan Glynn. Photograph: Tom Honan/The Irish Times

The Oireachtas golf society dinner in Clifden was “wrong”, “inexcusable” and “simply shouldn’t have happened,” the Minister for Health Stephen Donnelly has said.

The State’s acting chief medical officer Dr Ronan Glynn said that the event attended by more than 80 people - in excess of new and previous limits set by the Government - was “not in line with public health guidance.”

“It seems clear therefore that it should not have taken place,” he told a press briefing on Friday announcing the extension of Kildare’s lockdown and the lifting of restrictions for Laois and Offaly.

“Similar events should not take place in the future,” he added.

Mr Donnelly said that what happened in Co Galway was “flat-out wrong” and “sent out entirely the wrong message” and “undermines public health.”

The two most senior Oireachtas members in attendance at the event in a Connemara hotel had “rightly resigned” positions in response to the controversy, he said.

He said his Fianna Fáil colleague Dara Calleary and Fine Gael senator Jerry Buttimer, attendees at the golf society dinner on Wednesday night, had “done the decent and honourable thing” by resigning their respective positions as minister for agriculture and Seanad leas-cathaoirleach.

He declined to comment on whether Ireland’s EU Commissioner Phil Hogan, another attendee at the event, should resign or to say whether he still had confidence in him.

Mr Hogan’s position was “outside the remit of Government,” he said.

“It is not my place to express confidence. It is a matter for the commissioner and for the European Commission, ” Mr Donnelly said.

The minister said that as a member of Cabinet he was precluded from commenting on the attendance by Supreme Court justice and former attorney general Seamus Woulfe.

Asked about the event, Dr Glynn said that the public had “come too far in this country and too many people have sacrificed too much to be veered off course at this point.”

“We have seen that happen in other jurisdictions and we cannot let this happen here,” he said.

“A fundamental and key part of our success in this country to date has been solidarity and a sense of fairness and I would urge people to focus on what they can do individually.”

Asked whether elected representatives not following public health advice in Clifden could undermine adherence to continued measures in Kildare, Dr Glynn said that there was “justifiable and understandable anger in Ireland today” but that “the virus couldn’t care less about anger.”

“It is only waiting for an opportunity for anger or complacency or any other emotion that will trip us up as a community and stop us adhering to the public health advice,” he said.