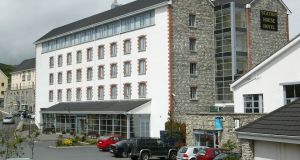 The Station House Hotel in Clifden – venue for the golfing dinner

Politicians and public figures among more than 80 people attending an Oireachtas Golf Society dinner during Covid-19 restrictions “should leave public life and do something else”, a leading public health expert has insisted.

Dr Gabriel Scally, president of epidemiology and public health at the Royal Society of Medicine in London, said he was shocked and saddened over revelations about the large gathering at the Station House Hotel in Clifden, Co Galway, on Wednesday.

Attendees appeared to be taking the attitude “do as we say, not as we do”, he said, adding: “This is absolutely wrong.”

Dr Scally said it was not enough for leading political figures to resign and lie low for a while over the affair, with the hope of resuming office again in a few years.

“They should leave public life and do something else,” he said.

Speaking on RTÉ’s Today with Sarah McInerney show, Dr Scally said the Irish public had made extraordinary sacrifices in the battle to curb the spread of coronavirus and were being let down by those in power.

Young people were being singled out by the Government over gatherings that were flouting official restrictions to control the pandemic. “Then they see this group of auld fellas out together,” he said.

Dr Scally said a “clear and consistent message” is necessary and the onus is on Taoiseach Micheál Martin and Minister for Health Stephen Donnelly to urgently develop a clear strategy on cutting the number of new cases to zero.

Labour leader Alan Kelly said those who organised and attended the golfing dinner “have let Ireland down in one of the toughest periods in our history”.

Mr Kelly said EU Commissioner Phil Hogan and Supreme Court Justice Séamus Wolfe – both of whom were in attendance – would need to be having “very strong conversations” on Friday about their role in public life.

“I think Phil Hogan’s position [as EU Commissioner of Trade] is not tenable,” he said.

“I think the standard set by Dara Calleary’s resignation applies across the board. It was a massive misjudgment, it was totally wrong. People saw what was going on there, and, even if they weren’t aware beforehand they should have left.”

Mr Hogan’s response, in a tweet, that he had been assured the event complied with Government guidelines was a “laughable excuse”, said Mr Kelly.

“He didn’t even offer an apology,” he added, suggesting Mr Martin could express no confidence in the commissioner to the EU if he were not to resign.

“If Séamus Wolfe was still the attorney general, I don’t think his position would be tenable either,” said Mr Kelly.

“The Chief Justice may very well think the same. I’d be surprised if there isn’t a very strong conversation along those lines today.”

The revelations have left the Government’s Covid-19 message in “tatters” while frontline health workers and those driving the public health response to the pandemic have been left “insulted”, the Labour leader said.

“It is taking them for granted and it shows a level of arrogance, that the people who attended believe there is a two-tier system in Ireland, where there is one rule for an elite and different rules for everyone else. It’s abhorrent,” said Mr Kelly.

It is “very difficult” now for politicians to ask the public to adhere to health guidelines, he added.