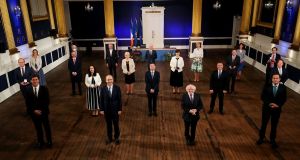 The making of a taoiseach is a solemn event, but it is usually garnished with a good deal of informality and emotion.

Once the vote of the Dáil has taken place, the nominee for taoiseach travels to Áras an Uachtaráin on the journey that will change his or her life.

The President and the incoming taoiseach are well-schooled beforehand by officials in the necessary protocol – the handshakes, the posing for official photographs, the presentation of the seal, the signing of the official documents and so on.

Out of sight of the cameras, though, squashed into the room behind the velvet rope, there is usually a gaggle of family and staff, excitedly witnessing the ceremonials. Applause and occasionally yahooing have been known to break out, say people who have attended in the past. But there was no applause last Saturday when Micheál Martin became the 15th man to become the elected leader of the country. There was no backslapping, no handshaking, no hugs.

There was a friendly encounter between two old political colleagues – the President and the new Taoiseach have always got on well since the days Labour was in government with Fianna Fáil in the early 1990s – and the ceremony was efficiently conducted. There was time for a cup of tea and a half an hour of official President-meets-Taoiseach discussions. But not much craic.

Even later, when the new Cabinet was formally appointed by the President in Dublin Castle – the venue chosen instead of the Áras because it allowed for social distancing – and a reception of sorts followed, it was strained enough. The Taoiseach buzzed around, pointedly making conversation with his new Fine Gael and Green Party colleagues, always from a social distance. Like the governmental programme which the new administration began implementing this week, the pandemic overshadowed everything. Or, at least, that’s what everyone thought.

By the following morning however, there was another pandemic – one of disaffection and disappointment – raging across Co Mayo, and the broader western, northwestern and midwest regions.

Dara Calleary’s anger at Martin’s failure to nominate him to a full Cabinet post, opting instead to make the Mayo TD his chief whip, was obvious to all his colleagues at the reception. By the next day, it was obvious to everyone else. The Sunday newspapers were full of it. Then the Monday papers were as well. Broadcasters took the temperature on the streets of Ballina; unseasonably hot. A disgrace, a snub, an insult. Take your pick.

One local cumann stalwart warned the Taoiseach not to show his face in Mayo. Sure, he would be run out of the place.

By Monday evening, Calleary himself – perhaps realising that the point had been made, and the controversy was doing him and his party no favours – sought to move on.

Martin – and everyone else frankly – knew that the grumbling politicians were mostly concerned about their own job prospects, rather than upset for their colleagues. Politicians are sole traders in many things, potential promotions above all. It was expected he would soothe the mood with the appointments of the junior ministers. The lobbying of the party leaderships was intense, insiders say.

This time, wisely, the three party leaders decided to keep each other informed of their appointments, though that delayed things. Eventually, on Wednesday, the list was settled. If Martin was seeking to pour oil on troubled waters, there was a bunch of lads waiting to throw a match on it.

Jim O’Callaghan, the former justice spokesman whose relations with the party leader have been sundered in recent months, was offered a junior role at the Department of Justice but turned it down. On the Fine Gael side, Joe McHugh, freshly deprived of a Cabinet role, also declined to join the ranks of the second tier. Though whatever grumbling there was in Fine Gael was kept in-house. Not so in Fianna Fáil.

Limerick was up in arms over the omission of Willie O’Dea; Sligo over Mark MacSharry; Cork North-West over former whip Michael Moynihan’s failure to make the cut. It was the old story of every reshuffle and all ministerial selections: those who are appointed tend to believe it is an overdue recognition of their talents; those left out believe it is a result of malice against them.

No taoiseach ever has enough jobs to keep people happy, but few have suffered such a backlash as Martin. By Wednesday evening, four days into the new Government, this did not look like an administration that had hit the ground running. Anything but.

There was no competing narrative offered by Government Buildings. The apparent absence of a working plan for the first seven days – never mind the first 100 – was glaring.

What was actually going on in Government – according to several people who moved jobs this week – was what always happens in the early days of a new administration: a mad scramble. For office accommodation, for facilities, staff, briefings, information, direction, practicalities and policy. “I think it took me three days to get an email address,” wailed one staffer.

Ministers arrived in their new departments on Monday to meet their senior staff, but some of the departments had been substantially re-engineered, and it wasn’t clear which senior officials were going and which were staying. The reorganisation of departments has to be on a provisional basis until legislation is passed to give it legal effect, but people still had to move immediately.

In the age of the Freedom of Information Act, many of the most sensitive briefings are not committed to paper

Take just one department. The top civil servant in the Department of Health, Jim Breslin, announced he was departing to go to the new Department of Higher Education with Simon Harris; deputy secretary Colm O’Reardon – once chief economic adviser to the Labour leader Eamon Gilmore – has taken up the post as acting secretary general. Meanwhile, preparations had to be made for chief medical officer Dr Tony Holohan to step down because of his wife’s illness.

In another department, a Minister was warned not to let the system – ie, the Department of the Taoiseach – impose a new secretary general on him until he had a chance to get to know the department. It was helter skelter stuff.

Ministers were buried under an avalanche of briefing documents, and also sought oral presentations from their senior officials, conscious that in the age of the Freedom of Information Act, many of the most sensitive briefings are not committed to paper. Officialdom always finds a way to protect itself. One Minister started on Sunday morning by meeting his new secretary general; a few days later, he was still working through meetings with his assistant secretaries and other senior officials.

Staff for the new Ministers had to be recruited, with the usual scramble for the best of each party’s research and press office staff. Others threw the net wider afield, sounding out journalists, NGO types, public affairs consultants and others familiar with the ways of government and the media.

Some want to get their team in place immediately; others choose to wait until things settle down before making the appointments. Each Minister can hire their own press officer and special adviser. But they also need a driver, and a private office which will be staffed by civil servants, some of which will be devoted to constituency matters.

Meanwhile, at the centre of Government, the Taoiseach was settling in to a hectic round of briefings. A selection of his diary entries from Monday gives a flavour of the pace.

First, a briefing with Martin Fraser, his top official and responsible for the co-ordination of Government work that ends up at Cabinet; EU and Northern Ireland briefings with John Callinan, the second secretary general at the Taoiseach’s department and responsible for Brexit; a meeting of the Cabinet at Dublin Castle; a meeting with Attorney General Paul Gallagher about the new Government’s legislative programme, with a particular focus on the first 100 days; a meeting with Minister for Finance Paschal Donohoe for an economic briefing; a meeting with Holohan for a briefing on Covid-19.

The following day – Tuesday – there were telephone calls with European Commission president Ursula von der Leyen, EU chief Brexit negotiator Michel Barnier and British prime minister Boris Johnson, as well as another briefing with Fraser and a meeting with the other two party leaders about the appointment of junior ministers.

And so on for the rest of the week. But how much ice does that cut in Ballina? Little enough.

One of the reasons why Fianna Fáil was historically successful is that it didn’t let the business of government interfere too much with the business of politics. It has been a long time since the party was in power; some lessons, it appears, will have to be relearned.