Release of Guildford Four, fall of Berlin Wall and Ireland qualifying for World Cup for the first time among highlights 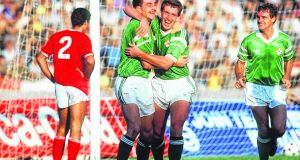 January 16th: The case of the Guildford Four is referred to the Court of Appeal.

January 17th: Douglas Hogg, a British Home Office minister, publicly suggests that a number of solicitors in Northern Ireland “are unduly sympathetic to the cause of the IRA”.

January 20th: George HW Bush is sworn in as the 41st president of the United States.

February 12th: Solicitor Pat Finucane (39) is shot dead by loyalists at his home in north Belfast, in front of his wife Geraldine, who was also injured, and their children Michael, Katherine and John.

March 20th: Chief Superintendent Harry Breen of the Royal Ulster Constabulary (RUC), and Superintendent Ken Buchanan are killed in an IRA ambush as they cross the border in south Armagh. An inquiry later found Garda collusion was likely.

March 21st: Corporal Fintan Heneghan from Ballinrobe, Co Mayo, Private Mannix Armstrong from Sligo and Private Thomas Walsh from Tubbercurry, Co Sligo, are killed when the truck in which they are travelling detonates a landmine in southern Lebanon.

April 15th: Ninety-six Liverpool FC fans are killed in a crush at an FA cup match against Nottingham Forest, in what becomes known as the Hillsborough disaster, at the stadium of the same name in Sheffield.

May 4th: Billed as The Ultimate Event, Frank Sinatra is joined onstage with Liza Minnelli and Sammy Davis Junior before 18,000 fans at Dublin’s Lansdowne Road stadium.

July 12th: Fianna Fáil leader Charles Haughey is re-elected as taoiseach after forming the party’s first ever coalition government with the Progressive Democrats.

July 24th: Peter Brooke is appointed as the new secretary of state for Northern Ireland.

October 1st: Civil union for same-sex partners becomes legal in Denmark, the first country in the world to enact such legislation.

October 19th: Three of the Guildford Four – Patrick Armstrong, Gerard Conlon and Carole Richardson – are released by the Court of Appeal after having spent 14 years in jail. Paul Hill is held in custody pending a hearing in another case but is later released. The court found their original confessions were fabricated by the police.

November 15th: Republic of Ireland wins 2-0 against Malta to secure qualification for the World Cup for the first time.

November 17th: After East German official Günther Schabowski accidentally tells a press conference that new rules for travelling to West Germany will be put in effect “immediately”, Germans celebrate by tearing down the Berlin Wall.