Varadkar condemns ‘absence of moral leadership’ in US, but ‘pernicious racism’ at home 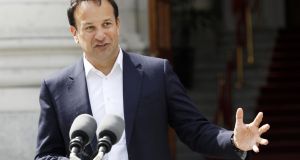 Taoiseach Leo Varadkar: said nobody who was working full-time before the pandemic will see their unemployment payment cut. Photograph: EPA

Taoiseach Leo Varadkar has told the Dáil the €350 weekly pandemic unemployment payment will be cut for some part-time workers.

He said the payment will be extended “for months, not weeks” beyond June 8th.

He said a Cabinet decision would be made on Friday on the future of the payment but “nobody who was working full-time before the pandemic will see their unemployment payment cut. It will stay at €350 a week for those who were working full-time”.

As reports emerged that the payment would be tapered, Mr Varadkar said some people who were working part-time “will see their payment reduced but their weekly payment will still be more than they were earning on a weekly basis before the pandemic”.

Opening a Dáil debate on the Covid-19 crisis, Mr Varadkar also expressed confidence that phase two of the reopening of the economy will go ahead on Monday.

He told the Dáil however that it is “far too soon” for people to book their holidays, “but summer is not yet lost”.

He hoped international air travel would resume through “air bridges” with countries that have suppressed the virus to a similar extent as Ireland.

“This however some weeks away,” he said.

He said the rate of positivity in testing for Covid-19 was now at 1.87 per cent based on 22,000 tests carried out last week.

“It is better to adopt a slow and steady approach rather than move too far, too fast and fall backwards.

“The economy will continue to re-open more people will go back to work and we’ll see more businesses resume trading, particularly the retail sector.”

There will be more outdoor sport with team sports training in small groups as long as social distancing can be maintained.

People will be able to meet in small groups indoors as well as outdoors and peopl e who work at home will be allowed to return to work more frequently.

Referring to the killing of George Floyd in the US, Mr Varadkar said there had been spontaneous expressions of solidarity at the poison of racism.

“We’ve also seen genuine revulsion at the heavy handed response in some instances towards peaceful protesters and journalists.

“And we’ve witnessed the absence of moral leadership, or words of understanding, comfort or healing from whence they should have come.”

He said racism was a virus “transmitted at an early age, perpetuated by prejudice, sustained by systems” and never easy to cure.

He said Ireland is “fortunate to have a policing model that is based on consent” but “we don’t need to look across the Atlantic to find racism. We have many examples in our own country. Racism on basis of skin colour is pernicious.”