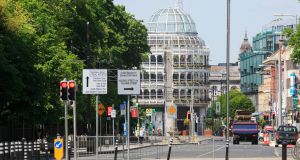 A quiet St Stephen's Green in Dublin on Wednesday. The ESRI has warned the economy is on track to shrink by more than 12 per cent this year. Photograph: Gareth Chaney/Collins

The Green Party is likely to agree that the next government should reduce the budget deficit in the second half of its term, following years of heavy borrowing to finance public investment in the wake of the Covid-19 crisis and what the Economic and Social Research Institute (ESRI) on Thursday warns will be the biggest economic slump in Irish history.

Suggestions by Fine Gael and Fianna Fáil that the next government should commit itself to a programme of deficit reduction had alarmed some Green Party TDs, who feared it could herald a return to austerity.

However, Green leader Eamon Ryan told the Dáil on Wednesday the next government must “get the deficit back in line”.

But he stressed this would come after a period of significant public investment, financed by borrowing, to stimulate growth in the economy after the economic crash caused by coronavirus.

Insiders say a path towards an agreed economic policy is emerging along these lines at the talks on a programme for government between the three parties, which are continuing at Leinster House.

Agreeing to a programme for deficit reduction in the second half of the government’s lifetime would satisfy key requirements for Fine Gael and Fianna Fáil, but avoid a Green revolt against adopting austerity policies.

This fiscal and economic policy would be in line with advice to the Government from both the budget watchdog, the Irish Fiscal Advisory Council and the ESRI, an economic think tank.

In a report published on Thursday, the ESRI warns of the deepest recession in the State’s history, saying the economy is on track to shrink by more than 12 per cent this year. In a worst-case scenario, where a second wave of the virus requires another lockdown in the final quarter of the year, the economy could contract by as much as 17 per cent, the ESRI says.

But the think tank warns the next government against moving too quickly to try to rein in the budget deficit in the coming years, arguing in favour of a stimulus package in the near term to fuel a recovery, and a budgetary adjustment later in its term.

“We have to focus on stabilising the economy, managing income supports and reigniting economic activity in the short to medium term,” said Kieran McQuinn, research professor with the ESRI, in a briefing to reporters.

“Certainly, the incoming government needs to be aware that at some stage there will need to be some sort of fiscal adjustment down the road. But the key point is that if we manage the stabilisation phase well over the short to medium term, that will ultimately minimise the scale of adjustment that’s needed over the longer term.

“If, on the other hand, you start to enforce the fiscal adjustments too soon, that will compound the shock, compound the downturn in overall economic activity, which, ironically, will mean you’ll need a larger adjustment over the longer term. That’s the key balancing act that’s got to be achieved,” he added.

Prof McQuinn highlighted social and affordable housing as well as projects that advance the green agenda as obvious areas for investment.

Coronavirus: One death, 25 new cases reported in State 18:11
Children who go abroad must self-isolate for 14 days before return to school in September 18:10
Angry Taoiseach calls for resumption of work on new National Children’s Hospital 17:56
Man tried to steal cars while high on crack and holding chihuahua 17:51
Judge gives landlord a week to halt Covid-19 parties near UCC 17:32