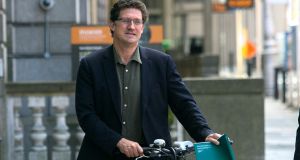 Green Party leader Eamon Ryan. The Greens have made it clear that the 7 per cent annual reduction in greenhouse gas emissions is a red line for the party in government formation talks. Photograph: Gareth Chaney/Collins

Independent TDs have been offered deals similar to that given to former Kerry Independent Jackie Healy-Rae to support a coalition between Fianna Fáil, Fine Gael and the Green Party.

The offer was made at a meeting between Fianna Fáil leader Micheál Martin, Taoiseach and Fine Gael leader Leo Varadkar and Green Party leader Eamon Ryan and Independents.

The meeting was attended by TDs Marian Harkin, Michael Fitzmaurice and Michael McNamara. A separate meeting with the nine-strong Regional Group of Independents is due to take place on Thursday.

Mr Varadkar said the deals would be similar to those offered to Mr Healy Rae and Mildred Fox, a former Wicklow Independent, by Bertie Ahern in the past.

Such an arrangement would involve local deals for individual TDs as well as access to government ministers. The Taoiseach is understood to have said the Fine Gael-Independent minority government operated similar deals.

The Independents were told they would be given a programme for government when it was agreed, and they were left with the impression that they would be supporting an administration from outside. It is understood that no ministerial posts or committee chairs were offered.

The offer from the three party leaders comes at a crucial juncture in the negotiations on a programme for government. One source said that the “mood has soured in the last week”, while another source, from another party, acknowledged that “a bit of gloom has descended over the whole thing”. However, sessions on finance and transport were said to be more positive on Wednesday.

Sources still say a deal is possible, but achieving the Greens’ demands of a 7 per cent annual reduction in greenhouse gas emissions is still a significant problem in the talks.

Fine Gael and Fianna Fáil have particular problems with proposed reductions in the agriculture sector, where some Green proposals are “undeliverable”, sources in both parties say.

The Greens have made clear that the 7 per cent reduction is a red line for the party, and they must have credible paths to achieve it if they are to sign up for a deal.

One of the other issues is a demand that 20 per cent of transport infrastructure budgets be spent on walking and cycling. This would be in addition to a Green demand that all transport spending be split on a 2:1 basis in favour of public transport over roads.

However, there is optimism that differences on the public finances can be resolved, despite differing views within the parties.

One senior figure in Fianna Fáil warned that the country would face a “full-blown political crisis” if there was no agreement on a programme for government next week, while a senior Fine Gael source acknowledged there is a belief in the party that it could benefit from another general election.