Taoiseach rejects call for boycott of all-male events in US 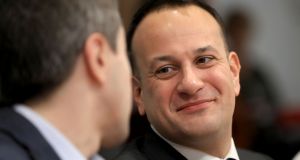 Diplomats will continue to be sent to events organised by men-only Irish-American societies, the Taoiseach has said.

However, Leo Varadkar said this could create a “double standard” if diplomats still attended male-only events in the Vatican, in Muslim countries or at LGBT events.

“I don’t think we could or should apply a double standard by boycotting male-only Catholic events in the US while still attending male-only events in the Vatican or the Muslim world or even gender-specific events organised by LGBT groups or women’s rights groups.”

In an email to Mr Varadkar, Ms Vargo shared a statement issued by the male-only Society of the Friendly Sons of St Patrick in New York notifying members that they were encouraged to invite female guests to its 235th anniversary dinner in March.

“I am writing to strongly encourage the Irish Government to stop sending diplomatic representatives to these men-only membership organisation events. It’s time to drag Irish America into the 21st century,” Ms Vargo, a former US congressional aide, wrote in her November 10th email.

She said male-only Irish-American societies were “not representative of the 36 million Irish Americans” . The image risked the future relations between the two countries, she said.

“This is but one example why the very future of this relationship is in doubt. I can’t tell you how difficult it is to interest people in becoming involved in a contemporary US-Ireland relationship when this is their image of Irish America,” she wrote in the email, released under the Freedom of Information Act.

“The Irish Government is seen to endorse such organisations when it sends representatives to these dinners. Are women supposed to be impressed by this? I hope the Government will do the right thing here.”

In a statement last year, the President of the Society of the Friendly Sons of St Patrick, Kevin Rooney, said that for the first time in the society’s history, women would be welcomed as guests of the 235th anniversary dinner.

“In 2019 the society will again expand its reach, this time with regard to the audience it welcomes to its anniversary dinner, by encouraging its members to bring at least one guest, preferably a female guest, to the dinner. This ‘expansive’ approach is consistent with our long history of supporting all people – especially women.”