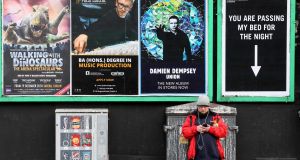 Taoiseach Leo Varadkar has admitted the housing crisis presented the biggest challenge faced by his Government in 2018.

However, he also claimed that when people look back they will see it as the year in which the Government turned a corner in terms of tackling the issue.

In a turn-of-the-year media interview, Mr Varadkar pointed to the higher number of builds completed over the past 12 months.

“We anticipate just under 20,000 new homes will be built in Ireland this year and this is the highest for a decade,” he said. “That does not include student accommodation or ghost estates being brought back into use or vacant homes: it is pure new builds.”

He said the social housing stock had increased by about 8,000, more than half of which had been newly-built by local authorities or approved housing bodies. He said the remainder had either been acquired or leased.

Mr Varadkar accepted the numbers in emergency accommodation have been in the 9,000-10,000 range now for a number of months.

“That remains to be seen. A lot of work is still to be done on that to increase the supply of housing in particular.”

He conceded that big challenges remained in dealing with rent prices and with home affordability.

Turning to public finances, Mr Varadkar said the Government was “increasingly confident” there would be a balanced budget for 2018, a year ahead of schedule.

“A lot of that is down to very buoyant tax receipts, income tax and also corporation tax as well. That means we will be heading into next year with a balanced budget. I am confident that we will be able to record a surplus again next year with a rainy day fund established as well.

“Needless to say Brexit is the elephant in the room. That could change a lot of our assumptions when it comes to public finances. But we are in a good position to absorb any shocks, should there be a shock to the economy, because the public finances are very much in good order.”

On the Government’s record on living standards, he pointed to a survey of income and living conditions published by the CSO, saying it was the only real objective study of living standards and poverty in Ireland.

“It shows that for the fourth year in a row, incomes are up, poverty is down, deprivation has fallen from 30 per cent back in 2012 to 18 per cent now, almost by half, we need to bring that down further.

“And about 24,000 children were lifted out of poverty last year. We don’t have the figure yet for this year but I anticipate the figure will be similar.

1 Meath farmer discovers overnight rave on his land
2 Coronavirus: 188 new cases and no further deaths amid concern over eight counties
3 Children removed from care of parents after claims they were ‘stripped and flogged’
4 Work to stabilise land after ‘suspected tunnelling’ behind terrace could cost €300,000
5 Downing Street denies reports Boris Johnson went on secret Italy trip
Real news has value SUBSCRIBE