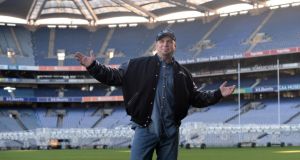 The Taoiseach’s intervention came after Garth Brooks declared he would still perform in Dublin if five concerts could be staged. Photograph: Dara Mac Dónaill

As efforts to settle the affair intensified, Mr Kenny is understood to have spoken by phone with mediator Kieran Mulvey. Mr Mulvey has embarked on new discussions with the city council’s chief executive Owen Keegan in a last-ditch manoeuvre to save the concerts later this month. “The Government is open to a positive outcome,” Mr Kenny’s spokesman said.

The Taoiseach’s intervention came after Brooks declared he would still perform in Dublin if five concerts could be staged. The American country singer cancelled the concerts after the council granted a licence for only three of them.

In an open letter yesterday to Peter Aiken, the concert promoter, Brooks said: “Our guys are still en route and if there is any chance that the five planned concerts can be salvaged and nobody is being let down then we can proceed as planned until the refunds begin.

“If you tell me, ‘Garth, thanks but it is over’ I will cease my efforts and bring our people and gear back to the States. If you think for any reason that the ‘powers that be’ in Ireland can fix this, then I will faithfully go to the last second.”

The Taoiseach is said to have ruled out emergency legislation when questioned last night at a regular meeting of the Fine Gael parliamentary party.

However, Minister for Tourism Leo Varadkar reported on efforts behind the scenes to resolve the matter. He was said to be prepared to travel to the US if required.

Meanwhile, Lord Mayor of Dublin Christy Burke has said he is hoping to meet with Mr Keegan in the presence of a mediator today in an effort to resolve the issue.

Mr Burke also told Morning Ireland that the Mexican ambassador has offered his help in the matter and that a group of Dublin residents intend to call on the assistance of president Barack Obama.

“The Mexican ambassador contacted me yesterday and he offered his services at a diplomatic level if he could be any help and I had a group of residents from Ballybough who said they intend to call Mr Obama to try to encourage Garth Brooks to play in Dublin,” he said.