Tánaiste: Schools will re-open at end of August if Covid-19 remains suppressed

Tánaiste Leo Varadkar says it would reflect badly on Ireland were it to be the only country Europe where schools did not re-open in September following the coronavirus pandemic. Video: Oireachtas TV 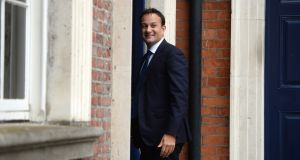 Schools will re-open at the end of August as planned provided the Covid-19 virus continues to be suppressed as it is now, Tánaiste Leo Varadkar has said.

He faced trenchant Opposition criticism in the Dáil over the failure to provide clarity about school re-openings just over four weeks before the start of the academic year.

“It will reflect very badly on us a politicians, on the Government and on the education system if we are unable to open our schools in August when other countries that suffered much worse than us didn’t close them fully at all” or were able to re-open them.

He said:“We want to get all the details right before we share them widely” because what would undermine confidence is to come out with a set of details and plans today and then change them in a week’s time or ten days’ time”.

He insisted that a lot of work was being done by the Minister for Education Norma Foley, her department, school principals and school partners.

“We need a little bit of people bearing with us for at least the next couple of days, couple s of weeks while those plans are put in place.”

He said that the previous minister for education stood with Mr Varadkar at a podium and said there would be a plan in place by the end of June but there was no plan.

“Is the plan that all children will return to education on a five-day week basis? Can you tell us how many additional teachers will be hired?

He asked what was happening on transport because Bus Éireann is asking them to pay for school transport but they do not know if children are going to go back.

“Can you give any indication that no ban on school uniforms?”

“Tens of thousands of parents have no idea are going back to school in September”.

They were stressed, concerned and anxious that there was no information out there

They deserve clarity from the State, he said adding that “by the time the Government publishes its plan it could be just three weeks before the schools re-open”.

But the Tánaiste said it was not true there was no information. He said the interim public health advice was there, there was a lot of stakeholder engagement and no issues had been raised from a public health perspective not to wear school uniforms.

Labour leader Alan Kelly said there had been complete silence from the Minister for Education who had been invisible.

He also expressed concern that there had been no tender put out by the Department of Education for PPE including sanitisers that all schools would need.

Social Democrats TD Catherine Murphy said everyone wanted schools to open at the end of August but “aspiration will not cut the mustard”.

The Tánaiste said the Minister would be in the Dáil next week to answer education questions and would answer on schools re-opening.