July stimulus: What does the plan mean for you?

What the Government’s €7 billion plan means for people, businesses and the environment 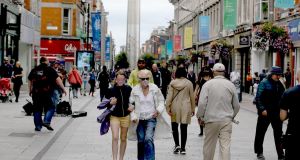 The Temporary Wage Subsidy Scheme is going to be replaced by an Employment Wage Support Scheme. Employers whose turnover has fallen 30 per cent will receive a flat-rate subsidy of up to €203 per week per employee. The scheme has also expanded, and now workers such as seasonal staff and new start up firms operating in affected areas will be included.

The Government had previously announced a €250 million restart grant, this is being more than doubled to €550 million and the upper limit for payments is being increased to €25,000; payments will also be available to those who already received a cash injection, through a top up mechanism, and some businesses like B&Bs who had been ineligible will be included.

The waiver of commercial rates will be extended to September, which will cost the government €60 million.

€55 million is being made available for small and micro companies, including measures to reduce rates and grants equivalent to 0 per cent in some loan products.

The Future Growth Loan Scheme is being expanded from €200 million to €500 million, with the support of the European Investment Bank, with businesses up to 499 employees eligible for longer-term loans at competitive rates.

The Covid-19 Credit Guarantee scheme is being expanded to €2 billion, as announced earlier this month.

There will also be subsidies of €7,500 paid to employers under a JobsPlus scheme, paid over two years to hire someone under the age of 30 who is on the live register or the pandemic unemployment payment.

Firms will also be allowed to delay payment of their PAYE and VAT debts in part or in full for a set period, with no interest or penalties.

There are funding packages for the seed and venture capital scheme (€10 million), another €10 million for the IDA, and €5.5 million for an online retail scheme, while the online trading voucher scheme will be expanded to €20 million. A €20 million Brexit fund for SMEs exporting and importing with the UK has been approved.

The Pandemic Unemployment Payment will be extended to the start of April, but gradually cut, and it will close to new entrants from September 17th, 2020. It will be cut in line with people’s previous incomes, and over time payments will be brought into line with existing social welfare levels.

There will be tens of thousands of upskilling and training positions across a variety of schemes, including a retrofit skills training initiative which will link up with a wider retrofitting programme. Overall, the budget for investment in skills, training and education is €200 million

The Back to Work and Back to Education Allowances will be extended to people on the PUP.

There will be new services to assist jobseekers. Including through JobClubs, JobPath and Local Employment Services.

The bike to work scheme is being extended, and will include a limit of €1,500 on “ebikes”.

The government’s help-to-buy scheme is being enhanced with the maximum relief available now €30,000, an increase of €10,000. The Taoiseach said he hoped this would improve affordability, and did not believe it would push up prices.

The interest rate on tax debt repayments is going to be reduced to three per cent to help those struggling with these payments.

For infrastructure and environmental spending

€500 million will be made available to for capital works, consisting of €75 million for primary and secondary schools, €113 million for “active travel, public transport and renewables of transport infrastructure, €40 million for investments in heritage, arts and Gaeltacht projects; €20 million for courts, prison and Garda projects, and € 10 million for fisheries and farm renewable energies.

€15 million will be made available for peatlands rehabilitation, €100 million for a national energy efficiency retrofit programme, and €60 million for returning vacant local authorities houses to use, and for investments in water infrastructure. There will be €10 millio for town and village renewal.

Capital expenditure is being increased by €1 billion for next year, to €9.1 billion.

As flagged this morning, spending on non-alcoholic beverages, food or accommodation of up to € 625 will be rewarded with a tax credit of €125. The Taoiseach said the level of spending to begin the tax payback would be just €25, and it will be administered via an app.

There will be €10 million provided in a restart fund for the tourism sector and a €10 million performance support scheme for the culture sector to assist in planning for events during Covid-19.

One of the major unflagged points is a new scheme that will allow firms that were previously profitable carry back trading losses early, leading to an immediate refund of some or all of their corporation tax.

A new income tax relief will also be introduced for the self-employed who were profitable in 2019 but are now facing Covid-related losses.

There will be a six month reduction in the standard rate of VAT, from 23 per cent to 21 per cent, effective from the beginning of September, at a cost of €440 million. This is a major effort to stimulate spending, and one of the most significant parts of the package.

There will be investments in Covid-specific life sciences products to the tune of €25 million, and €10 million is going to be made available through the first phase of a Green Enterprise fund.

Man’s body discovered on road in Harmanstown, Co Meath 09:12
Coronavirus: State at ‘tipping point’ in Covid-19 struggle, says expert medic 04:00
‘The top of my finger was gone’: Fireworks a clear and present danger in Halloween run-up 03:45
Eamon Ryan interview: ‘Climate action is where the jobs are going to come’ 02:30
Covid-19: Contact tracers to start looking into where people are infected 01:16