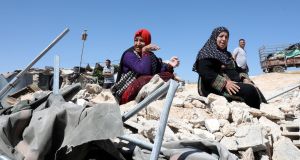 Palestinians collect their belongings after Israeli forces demolished their house in the occupied West Bank city of Yatta, claiming it was built without permision. Photograph: Abed al Hashlamoun/EPA

Tánaiste Simon Coveney has insisted that the Occupied Territories Bill will not be included in any new programme for government.

Mr Coveney reiterated his opposition to the legislation, which would ban trade in Israeli products made in the Occupied Territories, on the basis of legal advice that it would contravene EU law.

Fianna Fáil and the Green party supported the Bill when it was passed by both Dáil and Seanad but Fine Gael refused to enact the legislation.

Speaking in the Dáil, the Tánaiste told People Before Profit TD Gino Kenny “no I will not” when asked if he would include the Control of Economic Activities (Occupied Territories) Bill in a new programme for government

Independent Senator Frances Black, who introduced the legislation and championed it in the Seanad, has urged Fianna Fáil and the Green Party to “stand firm and deliver on pre-election commitments” they made and to ensure the Bill is included in a new programme for government.

Both parties strongly supported the legislation which aims to ban trade in goods produced in illegal settlements in occupied territories, including Israeli settlements in the Palestinian West Bank.

Mr Kenny said everyone rightly condemned oppression and racism across the world but when it came to oppressions and racism in Israel “we have a different tone to it. We criticise it but there are no consequences for Israeli racism”.

And he pointed to plans by the Israeli government to annex a part of the Jordan Valley in July.

But Mr Coveney, who is Minister for Foreign Affairs, said that 25 of the 27 EU member states agreed a “stated position regarding annexation” at a meeting of the Foreign Affairs Council.

“We have made it very clear that the EU would regard the extension of Israeli sovereignty over any Palestinian lands as an illegal act under international law,” the Tánaiste said. “We would have to recognise it as that, and there are consequences that would have to flow as a result.”

Mr Coveney said he and the Government were doing “all we can to try to impress on a new Israeli government, with which we want to have a good relationship, that this would be a real mistake in the context of Israel’s relationship with the EU and with the rest of the world”.

They wanted to encourage a dialogue that could get a peace process discussion back on track.

He believed the Palestinians and Israelis wanted a peace settlement that is good for both sides in terms of security and nationhood.

In a statement late on Wednesday night, Senator Black said that “Fianna Fáil and the Greens have shown leadership in sponsoring the Occupied Territories Bill, and as two-thirds of a potential coalition must now stand firm and deliver on their commitments.

“It’s deeply concerning that Fine Gael is seeking a reversal on a vital human rights issue with huge public support. With annexation of the West Bank looming, the case for the Bill has only grown stronger - this new government must now be courageous and enact it.”