‘Dev must be spinning in his grave,’ said British ambassador in Dublin 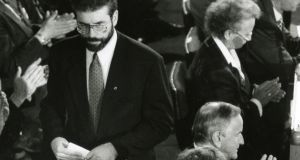 Sinn Féin president Gerry Adams being applauded by delegates after addressing the opening session of the Forum for Peace and Reconciliation at Dublin Castle in 1991. Photograph: Frank Miller

A decision by president Mary Robinson to meet Gerry Adams during a visit to west Belfast in 1993 was vehemently opposed by then Northern Ireland secretary Sir Patrick Mayhew, declassified files reveal.

Mayhew told a leading Ulster unionist that he believed the meeting would be “very damaging”.

Paradoxically, the files detail the efforts of the Northern Ireland Office (NIO) and the British ambassador in Dublin, David Blatherwick, to encourage politicians from the Republic to visit Northern Ireland.

In a memo dated March 4th, 1993, Blatherwick referred to the importance of informal meetings – or as he put it, “crack among the canapés” – but felt frustrated that his “hard work” had met such “a negative response” from Dublin politicians.

The ambassador’s proposal drew a mixed response from NIO officials. John McConnell of the Stormont central secretariat was less enthusiastic about political contacts: “At best this could happen on the Catholic side . . . but if we try to foster it on the Protestant side the political fallout would be quite damaging.”

By March 1993, concerns were being voiced over the increasing number of visits by president Robinson and taoiseach Albert Reynolds to the North and the question of “applying some brakes” was raised by David Watkins of the NIO.

However, in a memo to Watkins on May 11th, 1993, Blatherwick defended Irish government visits: “They help to break down inhibitions . . . they make Irish reticence over royal visits to the Republic . . . even harder to sustain. They convey a sense of normality and, of course, make articles 2 and 3 look even emptier than they are.”

The ambassador added: “Ten years ago I never expected to see an Irish minister attend a function in NI as a guest of the secretary of state. Dev must be spinning in his grave.”

However, Robinson’s visit to a west Belfast community centre on June 18th, 1993, where she shook hands with Adams, provoked the ire of Mayhew. The proposed meeting drew an advance telephone protest to Mayhew from the unionist lord mayor of Belfast, Reg Empey, on June 17th.

Empey said that, while he had a high opinion of Robinson, he felt the visit “would cause long-term damage”. It appeared to “legitimise Sinn Féin” and would dissipate the goodwill built up among the unionist community towards the president.

Empey’s views were strongly endorsed by Mayhew in his response to the lord mayor. According to a memo from Jonathan Stephens to NIO officials, the British government had only learnt of the presence of Adams the previous night. “[Mayhew] feared the meeting would be seen as the head of state of a country with a territorial claim over NI meeting Sinn Féin which justified violence in support of that territorial claim. That would cause grave damage to her, to the Irish government whose credibility with Unionists would be undermined and consequently, to the interests of the British government . . . ”

Stephens recorded that, as soon as the guest list was disclosed, the British ambassador had been instructed to deliver “a very strong message of concern” to the Irish government. Indeed, he reported, at an Anglo-Irish summit, “both the secretary of state and the prime minister [John Major] had urged most strongly that this meeting should not happen . . .

“The Irish were deeply embarrassed and realised that this was a disaster in the making, but they had no control over the president’s visit which was a private one.”

The documents have been made available this week by the Public Record Office of Northern Ireland, which is moving towards a release of state papers dated after 20 years in contrast with its Dublin counterpart which must adhere to the 30-year rule under Irish law.

A total of 675 files have been released this year, of which 158 files are open but subject to blanking out of some content while 26 files remain closed. The bulk of these relate to individual prisoners and the awarding of honours.

* Dr Eamon Phoenix is a political historian, broadcaster and commentator. He is a member of the Taoiseach’s Expert Advisory Committee on Centenaries.