We don’t think a no-deal Brexit is a probability, but it’s a possibility, Leo Varadkar says 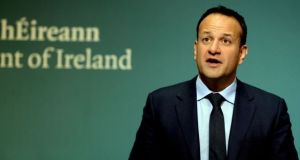 Speaking to journalists on Thursday, Taoiseach Leo Varadkar said: ‘What is certain to me is in order to avoid a hard border you must have alignment on customs and regulations,’ Mr Varadkar said. File photograph: Cyril Byrne

The Government has not and will not make any preparations for the possible return of a hard Irish border, Taoiseach Leo Varadkar has said.

Speaking to journalists on Thursday at Government Buildings, Mr Varadkar said a hard border would be very difficult to avoid if the UK diverges from EU customs rules. He said that while a no-deal outcome is a possibility, he did not believe it was a “probability”.

“What is certain to me is in order to avoid a hard border you must have alignment on customs and regulations,” he said.

His comments came after the Government published a document detailing some of its preparations for a no-deal Brexit, in which officials warned of severe economic consequences should the UK leave next March without agreement.

“Obviously it’s a fact that no deal is a possibility. We don’t think it’s a probability, but it’s a possibility. We’ve stepped up our contingency plans for that scenario . . . that work is very much ongoing. It is very much a work in progress. There’ll be more information in the middle of January about further contingency actions that are going to take place,” he said.

The Taoiseach lamented the amount of time and energy that Government was spending on Brexit, saying that it meant other issues could not get enough attention.

“As is always the case with Brexit, at the moment the biggest cost with Brexit is opportunity cost. A huge amount of time is being spent on Brexit that could have been spent on other things – potentially in the New Year, a huge amount of time spent in the Oireachtas on Brexit legislation that hopefully we’ll never need. But that is time that could be used on other issues, but unfortunately that’s where we are,” he said.

Mr Varadkar again insisted that the Government would not make any preparations for the return of a hard border, despite the deteriorating atmosphere on Brexit in the UK, where British Prime Minister Theresa May is struggling to get her party and the House of Commons to back the withdrawal agreement she negotiated with the EU.

“The answer I’ve been giving people all along is the honest truth,” the Taoiseach said.

“We’re not making plans for a hard border between Northern Ireland and Ireland. Our focus is entirely on getting an agreement that ensures that that doesn’t happen.”

Later, Mr Varadkar added: “We have made no preparations whatsoever for physical infrastructure or anything like that. We certainly do not want it to become a self-fulfilling prophecy.

“The contingency plans we are making are very real but they are happening at our ports, particularly Dublin Port, Dublin Airport and Rosslare, where we have acquired or are in the process of acquiring land and will develop border control posts in those places,” he said.

“They may be needed March in the event of a hard Brexit, but if they are not needed in March, they will be needed into the future, or are very likely to be needed at some point into the future. So that is contingency planning that we are making but we are not making to the border between Northern Ireland and Ireland.

“We simply cannot countenance that being the case.”

Meanwhile, Fianna Fáil has called on the Government to expedite the drafting of all Brexit-related legislation as it is concerned about the State’s preperations for a no-deal Brexit.

A stakeholder’s forum, attended by representatives of the political parties, was held on Thursday to discuss the Government’s contingency plans, which identify a range of potentially affected sectors that would require up to 45 pieces of emergency legislation.

Lisa Chambers, the Fianna Fáil Brexit spokeswoman, said it appears that drafting had begun on half of the required legislation.

“This is going to require the cooperation of the entire house in the New Year, so we need to know what the Government is doing,” she said. “I said in the stakeholder’s forum that we need to see the draft legislation as soon as possible, and to be fully briefed on it.”

A spokesman for Tánaiste Simon Coveney said he was confident that all necessary Bills could pass ahead of any potential no-deal Brexit.