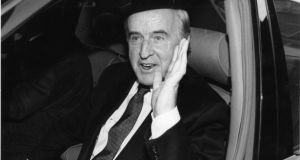 After he resigned as taoiseach in 1994, Albert Reynolds signed up to the Harry Walker Agency of New York. Photograph: Paddy Whelan

An announcement that former taoiseach Albert Reynolds was to start a lecture tour after he left office was met with “deep gloom” by a British diplomat who told a colleague that the politician should be watched closely.

The Irish Times reported in December 1994 that Reynolds, who had recently resigned as taoiseach, had been signed up to the Harry Walker Agency of New York and was about to be launched on the lecture circuit in the United States in the following March or April.

Roderic Lyne, then private secretary to prime minister John Major, expressed alarm at the possibility that Reynolds might make statements which would work against the British to an American audience.

After Reynolds’s death in 2014, Major spoke of how the two leaders had “the fiercest of rows without leaving scars” and said the former taoiseach was prepared to take risks.

“I read the enclosed article in The Irish Times yesterday with no surprise but deep gloom, mitigated only by the forecast that Reynolds would probably not be launched on the US lecture circuit until March or April,” Lyne said in a letter to Martin Howard of the Northern Ireland Office.

“I think that we should keep a careful eye on Reynolds’ movements. If he showed signs of heading for America sooner than March or April, we should at least consider whether there is anything we might do to mitigate the likely damage.

“The range of options could include a direct appeal to Reynolds to be statesmanlike, either by HMG [her majesty’s government] or by an Irish intermediary (both probably in the realm of wishful thinking); and some steps to shadow the Reynolds tour and try to counteract its influence on gullible American opinion.”

Reynolds joined other former statesmen such as US presidents George Bush and Gerald Ford, German chancellor Helmut Schmidt and Israel’s former president Chaim Herzog under the management of the Harry Walker Agency. The going rate for an address at the time by Reynolds was between $20,000 and $30,000, according to the report.