Major was furious with Clinton for granting Adams a visa 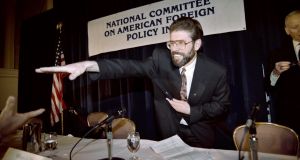 Sinn Féin president Gerry Adams reaches out for a supporter’s hand at a conference in New York in 1994. Photograph: Hai Do/AFP/Getty Images

Former UK prime minister John Major was so furious with Bill Clinton over the US government’s decision to grant Gerry Adams a travel visa in 1994, he felt unable to communicate with the American president until he was “in a calmer mood”, according to state papers from the time.

New documents released by the National Archives in London detail Major’s reaction to the granting of the two-day visa when Adams attended a conference on Northern Ireland in Manhattan.

British diplomats described the visit as a “fiasco” that gave the IRA a high-profile platform to justify terrorism. They also said the US government was left “bitterly disappointed” with the visit when the Sinn Féin leader failed to make significant moves towards peace.

Adams was granted the visa by the Clinton administration in January 1994. Initially leaning towards a refusal, the US government changed approach in the days before, when Adams made remarks about ending violence in a meeting with American diplomats in Belfast.

The visa came after lobbying from the British to refuse him entry and prompted anger from the prime minister down, according to the newly released papers.

In a memo to the prime minister on the matter, a written note from Major said he would put off a decision on a letter to president Bill Clinton until such time “when I am in a calmer mood over this”.

The draft letter to the president said that the visa was a victory for Adams in his campaign to avoid signing up to the Downing Street Declaration, which said that Britain had no selfish, strategic or economic interest in Northern Ireland and gave the IRA and loyalist paramilitaries the chance to engage in negotiations if they agreed a three-month ceasefire.

“The admission of Adams without such commitments [to renounce violence] and without an end to IRA violence is being seen as a major victory for Adams in his campaign to evade the joint declaration,” said the letter to Clinton.

“I would value your assistance in ensuring that no further damage is done to our peace initiative. The most immediate aim will, I hope, be to try and ensure that pressure is regenerated during and after the visit of Gerry Adams for the Provisionals to end violence unequivocally and unconditionally.”

Before the visa was issued, a British civil servant described the US’s wavering over the visa as “tedious” and said the British would continue to target opinion formers to push their agenda. Douglas Hurd, the British foreign secretary, told secretary of state Warren Christopher that the visa could result in further terrorist attacks.

“Giving him a visa while the IRA carried on their killing and bombing campaign would be providing apples before harvest time. A visa would be a real prize for the IRA. They were also skilled tacticians and would be be tempted to cause maximum disarray between Britain and the US during any such visit. They had enough wit to arrange for an outrage to take place on the British mainland while Adams was in the United States. Then we and the Americans would be in trouble,” a memo on the meeting said.

A group of 12 senators wrote to Clinton to push the case to admit Adams and the “White House were shaking under the Irish American bombardment” according to Roderic Lyne, Major’s private secretary. Lyne wrote to the British embassy in Washington, telling them to push for Adams to be questioned on terrorism. “His American hosts and interviewers need tutoring to stop Adams’s evasions,” he said.

When the visit began, the British said Adams had been offered his most prominent stage yet. “Adams appears to be using your television networks and the high profile of this visit as the finest platform ever granted to the IRA to justify terrorism. His mendacious words are echoing back here and in Northern Ireland and are having precisely the damaging effect of which I warned,” wrote Lyne to Tony Lake, the US national security adviser.

At the conference Adams had travelled to New York to attend, he offered “nothing new”, according to Robin Renwick, the UK’s ambassador in Washington.

“The administration and those who persuaded them to admit Adams have been bitterly disappointed by his statement in New York, which contains no significant steps towards ending the violence or accepting the joint declaration,” he wrote.

“Some fairly desperate efforts are being made to urge Adams to say something more positive before he leaves the US tomorrow. Unless he comes up with something new fast, the visit is turning into something of a fiasco.”

In a letter to taoiseach Albert Reynolds, Major said the visit had worked to undermine the Downing Street Agreement. “It has done a lot of damage, and the administration must be regretting their decision to let him in,” said Major.

Reynolds was resistant to criticism about the visit to David Blatherwick, the UK’s ambassador to Dublin.

“The Taoiseach was defensive and emollient. I could hardly get a word in edgeways. While not regretting his actions over Adams’ visa (he is not a man for second thoughts, and the belief that the trip to New York has put the Provisionals under pressure is common here), he realises he has badly damaged fences to mend.”

Covid-19: First dose of vaccine given to 1.9% of people in State, Minister says 11:04
Empty shelves in the North are because of Covid, not Brexit, says Lewis 08:30
Regulator receives 81 reports of suspected Covid-19 vaccine side effects 08:25
Storm Christoph: Widespread heavy rain expected with flood risk 08:17
Hospitals in south and southwest getting lion’s share of Covid vaccines 03:00