State ‘has duty’ to help subcontractors after Carillion collapse 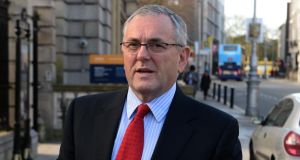 Oireachtas Committee on Finance Committee chair John McGuinness said he did not accept the Department of Public Expenditure’s position that “you just write policy and then you sit back”.

The State was not a party to contracts to build schools and an institute of education that have collapsed and now threaten more than 100 small subcontractors, the National Development Finance Agency (NDFA) has insisted.

Earlier this year the UK Carillion group collapsed into administration, which resulted in the Irish construction firm Sammon Contracting Ireland Ltd, which had been hired by Carillion to build the schools, going into liquidation.

The public-private partnership (PPP) project is worth just under €100 million and Sammon employed about 160 subcontractors, the Oireachtas Committee on Finance was told on Thursday.

Noting the “very difficult and distressing” difficulties, David Corrigan, head of project management with the NDFA, said the State “is not, and was not, party to any works contracts with these subcontractors”.

They were “private, commercial contracting agreements”, he said, adding that at this point there did not appear to be a viable basis for a lawsuit against KPMG LLP, auditors to Carillion.

However, the State had a duty to find a solution to the crisis facing the subcontractors who have been “shafted” and who could “go to the wall” over the Carillion collapse, Oireachtas members complained.

Officials from the National Development Finance Agency and the Department of Public Expenditure appeared before the Oireachtas Committee on Finance on Thursday. The NDFA advises the State on public investment projects.

The committee heard earlier this month that new contractors are now on three sites, and the schools – Loreto College, in Wexford, and Coláiste Raithín and St Philomena’s Primary School, in Bray, Co Wicklow – are on track to be completed by August and open in September.

In 2012, the State entered into the PPP deal on the projects, jointly run by Carillion and the Dutch Infrastructure Fund (DIF).

Mr Corrigan said the NDFA is in ongoing discussions with DIF to ensure the necessary building control certification will be available to allow the schools to be opened and occupied in compliance with regulations.

Sinn Féin finance spokesman Pearse Doherty asked whether there was not a “moral question” for the State, and particularly for the NDFA, in relation to having the buildings certified without the input of the subcontractors who could sign off on their work.

It was not right, he said, that we would have children going to schools knowing that the people who built them did not get paid and that their companies “went to the wall”.

Independents 4 Change TD Mick Wallace said the State parties had washed their hands of the issue and he asked whether it would consider taking a case in the courts against KPMG for the fact that its “false” information about Carillion had “led to so many subcontractors getting shafted”.

KPMG, Carillion’s auditor, is under investigation by the UK’s accountancy regulator to establish what role it had.

In May, British MPs demanded the UK’s big four accountancy firms, including KPMG, be referred to competition authorities for potential break-up following the collapse of Carillion.

Committee chair John McGuinness, of Fianna Fáil, said he did not accept the department’s position that “you just write policy and then you sit back”. “You have a role in this,” he said.

Mr McGuinness said the subcontractors were being “blackguarded”.

“I think the State has an obligation to exercise the rule of law and I’m going to ask you to consider that,” he said.

Mr McGuinness asked that the parties provide further information on the amounts of money owed and the number of subcontractors involved.

“I would suggest the time has come in Ireland where you should give the banks a haircut – a good decent haircut – rather than the [subcontractors],” he said.