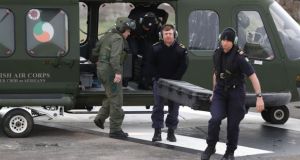 It is the second time in a fortnight that the Defence Forces have engaged in such a cross-Border operation. File photograph: Brian Lawless/PA Wire

The Air Corps is assisting Northern Ireland emergency services to deal with a fire in Tollymore forest area in Co Down.

Minister of State for Defence Paul Kehoe has confirmed that diplomatic approval has been granted for the Air Corps to cross the Border to assist in dealing with the fire.

It is the second time in a fortnight that the Defence Forces have engaged in such a cross-Border operation, at the request of the UK, but it had never happened before then.

The Department of Foreign Affairs earlier this month liaised with the UK authorities to ensure all necessary measures are in place for the Air Corps to cross the Border.

The first operation the Air Corps engaged in was to help fight a fire on Slieve Gullion, just 3km (two miles) north of the Border.

Minister Kehoe said the Air Corps has been extremely active this summer in dealing with fires on both sides of the Border.

“Never before had the Air Corps assisted in dealing with forest fires in Northern Ireland. All of the agencies are working closely together to keep communities safe, including those belonging to our nearest neighbour.”