As multinationals commit to net-zero emissions, ability to ‘deliver greenness’ is crucial 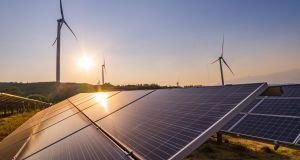 FDI companies were already clearly signalling they will close down operations in countries where net-zero cannot be delivered locally. Photograph: iStock

There is huge demand from multinationals “racing to net-zero emissions” for corporate power purchase agreements (PPAs) with renewable energy developers – both solar and wind – but Ireland is losing out due to cost and other policy barriers, according to KPMG global head of renewables Mike Hayes.

Addressing these issues would be critical to securing strong foreign direct investment (FDI) in a post-Covid world, he warned.

He added: “What I’m seeing around the world is the rise and rise of ‘net-zero’... companies and countries are committing to net zero. It’s an absolutely fantastic thing; [I’m] not always sure they know what it means.”

But in the renewable energy sector it amounted to a very promising time for developers around the world, because getting to net-zero was considered critical. This also meant there was pressure on upstream supply chains to also meet that requirement.

This was having a “domino impact” on the marketplace, with companies committing to 100 per cent renewable energy, which was forcing the agenda on how they adopt renewables. Looking at corporate decarbonisation, Mr Hayes said, it was not just investor or government pressure to decarbonise, but also senior executives who were really worried about their job security – which had to be good for the renewable energy industry.

The other driver would be the green deal in Europe and a likely similar deal in the US from the new Biden administration, he told a webinar hosted by the Irish Solar Energy Association on Monday.

Commenting on a KPMG assessment of solar price indications and “sensitivities” in the Irish market in light of the recent RESS-1 renewable auction announced by the Government, he said the findings indicated the importance of making corporate PPAs competitive in the Irish market.

“If we’re not ready to actually deliver corporate PPAs to our FDI clients, Ireland Inc is going to lose out,” Mr Hayes warned. “In the old days it was tax and labour and language and skills that were important in delivering FDI in this country. Now it’s the ability to deliver greenness.”

There was already indication of corporates going elsewhere if that could not be delivered on, he noted. Everybody involved knew the importance of climate change, net-zero and renewables, but aligning renewables policy with FDI was now critically important for the country.

He confirmed nine years ago he had said solar would never happen in Ireland, but added he had been proven wrong on that many times since then.

Russell Smyth of the KPMG Sustainable Futures team, who was involved in compiling the report, said there were indications that a “risk premium” was already being applied to Ireland, a friction that the Government should try to remove from the marketplace. This would also help reduce the cost of delivering projects.

FDI companies were already clearly signalling they will close down operations in countries where net-zero cannot be delivered locally, he added. That reality had to be faced up to.

The Irish Solar Energy Association (ISEA) chairman David Maguire said Ireland would move down “the scale of attractiveness” because of lack of progress on net-zero and pricing issues, unless it got its act together.

In contrast, the historically low cost of capital and on solar technology meant Ireland “will get late mover advantage”.

Mr Maguire said the independent analysis by KPMG confirms the Irish “strike price” for solar contracts under RESS-1, at €72 per megawatt hour, was higher than most other jurisdictions in Europe, but outlined tweaks that could be implemented to bring the price down materially.

Securing those changes, he underlined, would not benefit asset managers or developers but would provide greater certainty and ensure cheaper prices for consumers through reduced public service obligation levy.

A total of 63 solar projects totalling 796 megawatts were notified of a contract award in RESS-1. There is a strong possibility that some of these projects may not post a performance bond and thus proceed, Mr Maguire said. “We will know for sure when the Department [of Environment, Climate and Communications] makes this public. We do not expect the attrition rate to be too high, but certainly some will fall away.”

ISEA has announced that Conall Bolger, head of energy markets at Cornwall Insight Ireland, is to become its chief executive in January.