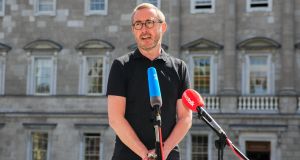 Sinn Fein TD Eoin O Broin said the party had a “clear independent disciplinary process and that has to be allowed to follow its due course”.Photograph:Gareth Chaney/Collins

A social media “pile-on” against anyone who criticises Sinn Féin does not aid or assist the party, its housing spokesman has said.

But he hit out at a claim by Minister for Further Education Simon Harris that the party sent in the “heavies” when a UCD Ógra Shinn Féin member Christine O’Mahony was critical on Twitter of the party.

On Friday Ms O’Mahony tweeted about being told not to discuss internal issues in public and after a party member called to her house to ask her to delete recent critical tweets.

She left the party in light of the controversy surrounding Sinn Féin TD Brian Stanley who said he had nothing to apologise for over a 2017 tweet about Leo Varadkar.

A row over Mr Stanley’s social media comments first erupted after he tweeted about the Kilmichael Ambush in 1920 - when 17 British soldiers and 3 IRA members were killed -- and Narrow Water, near Warrenpoint in Co Down, which killed 18 soldiers, claiming they were “the 2 IRA operations that taught the elite of d British army and the establishment the cost of occupying Ireland. Pity for everyone they were such slow learners”.

Mr Stanley later deleted the tweet and apologised, describing it as “inappropriate and insensitive”. He is expected to make a statement to the Dáil next week.

The controversy continued after the 2017 tweet emerged in which the now-head of the Public Accounts Committee wrote: “yippee 4 d tory. it’s Leo. U can do what u like in bed but don’t look 4 a pay rise the next morning.”

Ms O’Mahony tweeted about her decision to resign from the party and about how a party member came to her home about her criticisms.

Mr Harris said “it was extremely concerning that a young woman who tweets something that a political party doesn’t like will get a knock on the door to be told that tweet is not liked and the Sinn Féin response would be that internal matters should be dealt with internally”.

The Minister said his party would not send the “heavies” around for a tweet the party did not like.

Mr O Broin rejected the “heavies” claim and said that “what the individual did was wrong and nobody should have called to the activist’s door”. He added the party had a “clear independent process” and where complaints are made they are followed “vigorously”.

On RTÉ’s The Week in Politics he was asked about the social media “pile on” when Sinn Féin supporters criticised and trolled Ms O’Mahony for tweeting about the incident and her resignation from the party.

Mr O Broin said in both of those cases those people who did that “did the wrong thing. They are not in any way assisting or aiding our party”.

He said social media should be about engagement and the cut and thrust of political argument.

Speaking about Mr Stanley he described him as a politician of “serious integrity who has worked hard for his constituents” including on the peace process.

He said that “where people make mistakes they need to do the right thing and I think that’s what Brian is trying to do and I think people should give him the courtesy of listening to his statement in the Dáil”.