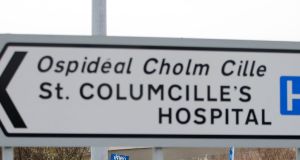 St Columcille’s Hospital, Loughlinstown has decided to close its medical assessment unit for two days due to a significant Covid-19 outbreak.

A south Dublin hospital has said 31 patients had now contracted Covid-19 following a significant outbreak in the facility, with 58 nursing staff unavailable with the virus or self-isolating as close contacts.

The hospital on Monday has decided to close its medical assessment unit for two days from 5pm.

This follows a decision late last week to suspend outpatient appointments due to the outbreak.

In a statement, a spokeswoman for the hospital said there were currently 58 nursing staff “not available” as they had contracted Covid-19, or had been deemed close contacts of confirmed cases.

“This is an ever-changing situation and is being monitored on an ongoing basis. In line with national occupational health guidance, it is expected that some staff are to return early next week,” she said.

“St Columcille’s Hospital, Loughlinstown, are continuing to respond to pressures arising from a Covid-19 outbreak which occurred in late October … The Hospital Covid Plan is being implemented and progress has made to stabilise the situation,” the spokeswoman said.

Last week The Irish Times reported the hospital was dealing with an outbreak involving 22 patients, which arose from transmission of the virus within the facility.

St Columcille’s Hospital is an acute hospital with over 100 beds serving south east Dublin and east Wicklow. The facility had not reported a Covid-19 case for several months before the current outbreak.

The two-day closure of its medical assessment unit is a further attempt to limit the spread of the outbreak. The hospital’s injury unit remains open.

“The hospital has contacted the local community and GPs and have asked patients who require care to be redirected to St Michael’s Hospital Dun Laoghaire,” the spokeswoman said.

“The message for the public is that please don’t delay to seek medical attention. Contact your GP who will refer you to an appropriate facility should require further care,” she said.

The first case in the outbreak was identified when a patient, who was asymptomatic, was tested, as per protocol, prior to a pending transfer to St Vincent’s Hospital in late October. The patient had been in St Columcille’s for several weeks.

On foot of the first positive case, the hospital implemented a “surveillance process” to test all patients and staff deemed close contacts. However, it is understood there were some concerns internally that the number of staff deemed to be close contacts of the initial case was too limited.

The hospital has stated it had followed Health Service Executive and Health Protection Surveillance Centre guidelines.

If staff had been wearing face masks and following precautions when interacting with patients who later tested positive, “they are considered casual contacts and no testing is advised,” the hospital spokeswoman said.