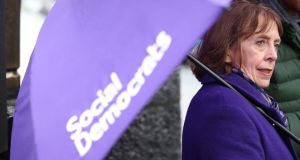 Social Democrats joint leader Róisín Shortall: Sláintecare plan had got off ‘to a very bad start’. Photograph Nick Bradshaw for The Irish Times

The Social Democrats have said a fully funded implementation of the Slaintecare health reform programme would be “an absolute red line” in any potential discussions about coalition after the election.

The party said the plan would cost approximately an additional €1 billion per year for the next five years and a further €500million extra in the following four years.

Social Democrats joint leader Róisín Shortall said the Sláintecare plan had been agreed by all parties in 2017. However, she said it had got off “to a very bad start”.

She said the follow- through from the Government on implementing the plan had been disappointing and much too slow. She said no specific budget had been allocated for the reform plan in 2018 and that the money earmarked in 2019 had come nowhere close to allowing for the step changes set out in the programme.

Ms Shortall said Sláintecare was “the only game in town”.

“Nobody has a Plan B”, she said. “Nobody is disagreeing with Sláintecare. The difficulty is what we need is a commitment to funding and the full implementation of that reform programme.”

Ms Shortall said the Social Democrats would not be entering government without a clear commitment to the delivery of the Sláintecare programme.

“That means the new government laying out a ten-year funding programme for Sláintecare and including this cost in the pre-committed element of the annual budget process as already happens in respect of the national development plan and public pay agreements.”

The Social Democrats said if the current disorganised approach to the health service continued, the costs would escalate beyond the capacity of the State to deal with them and that waiting lists would become even longer, leading to people becoming more dependent on the expensive private sector.

The Social Democrats said its priorities for action within Sláintecare were the abolition of homecare waiting lists, expanding diagnostic services such as the provision of X-ray services in local primary care centres and a phased extension of free GP care.

The party backed the recruitment of salaried GPs by the health service rather than relying on doctors acting on a contract basis for the State.

The party also said it wanted to see additional funding for dementia and Alzheimer’s services and for palliative care.