Letter sent to Martin, Varadkar centred on how increased spending would be financed 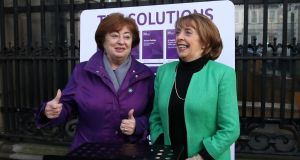 In a letter at the weekend to Mr Varadkar and Mr Martin the Social Democrat leaders said the draft stability programme update, which they said ‘appears to indicate that public spending will return to the budget projections for 2021 which were formulated last year in a pre-coronavirus environment’. Photograph: Sam Boal/Rollingnews.ie

In a letter at the weekend to Mr Varadkar and Mr Martin the Social Democrats said the draft stability programme update, which they said “appears to indicate that public spending will return to the budget projections for 2021 which were formulated last year in a pre-coronavirus environment”.

They said this raised further questions “specifically regarding the financial underpinnings of the Framework Document you sent to us on 15th April”.

They raised questions about what programmes would be cut to meeting rising unemployment because of the Covid-19 pandemic.

The two women stressed that “we fully recognise the extraordinary circumstances facing Ireland and the significant fiscal challenges in responding to the health and economic crises, both now and into the future”.

In nine questions to the Fine Gael and Fianna Fail leaders they asked how public housing, the Slaintecare policy, increased public transports capacity to reduce carbon emissions would be financed given that the stability programme update projections “do not show any change over the projections in the 2020 budget”.

“How will the commitment to reform and increase income supports through a stronger social protection system be financed given that projections in the SPU (stability programme update) will only fund the expected increase in unemployment numbers?”

The update anticipated that “primary public spending in 2021, excluding social payments, will fall below budget projections. What programmes are the parties currently considering cutting in order to pay for higher unemployment levels?”

They also wanted to know “will the parties commit to publicly campaigning at EU level for the long-term suspension of the Fiscal Rules, followed by a reform which would exempt public investment from excessive deficit procedure”.

Ms Shortall and Ms Murphy said the Framework Document states “Exercise sound management of the public finances, by reducing our deficit as the economy grows; and comply with the EU Fiscal Rules and the Stability and Growth Pact.”

They asked “how will borrowing incurred during the crisis be treated”.