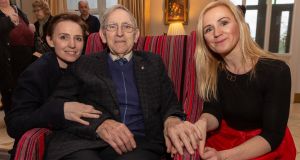 Murt McInerney was born into Fianna Fáil. A member of the party for more than 60 years, he drew deeply on the loyalties of his mother, Minnie O’Grady, who was a founding member.

This year, his daughter Rita ran for Fianna Fáil in the general election in Clare. Today, Mr McInerney believes that the party has no option but to join with Fine Gael in government. However, he fears that Sinn Féin will be the long-term winner in such an arrangement.

“Fianna Fáil and Fine Gael may have no choice but to come together for the good of the country. I would support that, but they will suffer for it,” the 82-year-old Doonbeg native told The Irish Times.

“It’s a difficult situation, the country needs a strong government. It’s time to bury the Civil War politics. That’s what I think. There isn’t that much between the parties anymore,” he added.

“I don’t know what is going to happen. Everything is all up in the air, they [the political parties] are floundering in the dark. There are no easy choices but I would take Fine Gael over Sinn Féin anyway,” he declared.

In Kerry, the memory of the Civil War lingers among older generations, though an agreement between Fine Gael and Fianna Fáil in Kerry County Council six years ago foreshadowed this week’s coalition moves.

In 2014, Fianna Fáil councillor John Brassil was elected chairman of Kerry County Council with support from Fine Gael in a historic vote signalling the end of Civil War politics in the county. The chair now rotates between the parties.

That council included Fine Gael’s Patrick Connor-Scarteen and Fianna Fáil’s Thomas McEllistrim, the grandchildren of two men who had fought together in the War of Independence but who had divided subsequently.

In 1922, Mr Connor-Scarteen’s grand-uncles, 20-year-old Tom Connor-Scarteen, a brigadier general in the National Army, and his 25-year-old brother John, were shot in their Kenmare home.

Thomas McEllistrim’s grandfather, Tom McEllistrim snr, never condoned the Civil War killing, which shocked the county. Indeed, he was one of the first to sympathise with the dead men’s mother, coming to the house in Kenmare.

Six years ago, Mr Connor-Scarteen and Mr McEllistrim shook hands on the council deal, signalling that for the first time the parties could work together.

“It has worked. But Kerry County Council and local government is a different thing to government. Fine Gael will have to stay true to its base and really identify our separate identities,” Mr Connor-Scarteen said.

Usually, he would object to a coalition with Fianna Fáil. “Ordinarily, I would be against it. But we are in unique and different circumstances. We need solid government with experience and one that will make difficult yet compassionate decisions,” he said.