Leo Varadkar hopes he can announce easing of restrictions next month 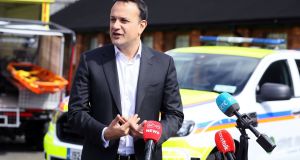 Taoiseach Leo Varadkar said the intention was to reopen areas that have ‘the most benefit to our economy and society but the least risk in public health terms’. Photograph: Brian Lawless/PA Wire

Taoiseach Leo Varadkar has said he hopes to be able to announce the removal of some coronavirus restrictions by May 5th but did not want to give “false assurances”.

Mr Varadkar confirmed the Government will release details of its plans to lift restrictions introduced to combat the spread of coronavirus in advance of May 5th, when they are due to be either lifted or extended.

In his first major broadcast interview since the escalation of the Covid-19 pandemic, Mr Varadkar said the Government was preparing a plan that would allow the reopening of the Irish economy and society on a phased basis which he hoped might begin on May 5th.

Asked by Miriam O’Callaghan on RTÉ’s Prime Time if there might be some removal of restrictions on May 5th, Mr Varadkar said: “That is what I’m hoping when I stand up there and speak to the Irish people in early May, that is what I want to be able to say, but I don’t want to give a false assurance now.” He said it would depend on the infection rate of the virus, capacity in hospitals and testing and tracing.

While the plan was still in development, Mr Varadkar said the intention was to open areas that have “the most benefit to our economy and society but the least risk in public health terms”.

“I think everyone understands it won’t be done in one go, in one fell swoop. It won’t be back to normal on day one,” he remarked.

Mr Varadkar said two of three criteria to relax restrictions were being met – an improved rate in the slowdown in the increase of the virus and in the capacity of hospitals to deal with another surge – but testing and tracing measures were still “not quite there”.

Speaking on Tuesday evening, the Taoiseach said the Government would closely monitor how the reopening of schools and shops in countries like Denmark and Germany was working.

Mr Varadkar said he would encourage people in society and businesses to think about what they would do to implement social distancing if they were told they could reopen their facilities.

The latest official figures show 730 deaths due to Covid-19 have been confirmed, while there are also a further 108 probable or suspected deaths due to the virus reported in care settings.

Mr Varadkar said it was difficult to know for sure how Ireland was doing on a comparative basis but he acknowledged that there was still “quite a high death toll and death rate”.

The Taoiseach said he wanted to see a fall in the number of deaths and people infected with the virus in the next few days.

However, he said he felt sure certain things could have been done better when the Government’s performance was reviewed at some future point.

He added: “I am sure if we had not taken actions there would be many thousand more deaths today.”

Mr Varadkar defended the Government’s approach to addressing concerns about patients in nursing homes, where a large proportion of infections and deaths from the Covid-19 virus have been reported.

The Taoiseach said the virus had been suppressed in the community and hospitals had been prevented from being overwhelmed with cases, which were necessary measures at the outset of the pandemic.

He claimed the health authorities had been dealing with vulnerable populations and it was not a case of prioritising one group over another.

However, he regretted that certain actions with regard to nursing homes were not done sooner, including on testing.

Asked if the Department of Health had made a mistake in initially advising nursing homes that they were wrong to close their facilities to visitors, Mr Varadkar said he was not sure such a claim could be made. The Taoiseach said the department had issued that advice on the recommendation of a group of medical experts.

Addressing the latest stark figures on the impact of the Covid-19 crisis on the economy, with estimates by the Department of Finance that the unemployment rate could reach 22 per cent while GDP could fall by 10.5 per cent this year, Mr Varadkar said the high cost of sustaining large numbers of people out of work due to the crisis was sustainable as long as the Government was able to borrow at affordable interest rates.

“That is why it is so important to retain the confidence of the European institutions and the bond and financial markets,” he added.

He said the State was in a much better position than during the global financial crisis more than 10 years ago, as the country had built up a good reputation in managing its public finances.

“We need to ensure we maintain that position,” Mr Varadkar said.

The Taoiseach said he would examine introducing further restrictions on people travelling to Ireland, although he stressed that there were already strong rules in place which required anyone arriving in the country to self-isolate for 14 days.

The Taoiseach said he would like to “tighten that a bit” in terms of having a mechanism to monitor new arrivals to the Republic, but also pointed out that there were now comparatively few imported cases of the virus.

On the controversy surrounding the hiring by Keeling’s of workers from Bulgaria as fruit pickers, before flying them into the State, Mr Varadkar stressed that agriculture workers were regarded as essential workers during the current crisis.

However, he remarked that it was “not essential” that they had to come from outside Ireland and the question of Irish people taking up such jobs would be looked at.

On the formation of a new government, Mr Varadkar said he had agreed with Fianna Fáil leader, Micheál Martin that no decision on a rotating taoiseach or the allocation of ministerial portfolios would be taken until they could also be discussed with a third coalition partner.

Asked if he had a preference about becoming taoiseach first under the new government, Mr Varadkar replied: “It sounds like a line but it really is true – it so isn’t about me, I will do this job to the best of my ability for so long as I hold it.”

Mr Varadkar said it would be a privilege to act as taoiseach but warned that forming a government now was “not for the faint hearted” as the country faced a very different situation to that at the time of the general election.

He accepted that the document agreed between Fine Gael and Fianna Fáil on the formation of a new government was “aspirational” but said it was specifically designed not to act as a “fait accompli” to be presented to any other coalition partner.

Mr Varadkar expressed hope that potential coalition partners like the Green Party, Social Democrats, Labour and groups of Independent TDs were “up for this” as the country needed a stable government.

On housing, Mr Varadkar said he believed it would be realistic to provide 10,000-12,000 new social housing units each year over the next five years.