Sláintecare ‘relegated to sometime in the future’ in programme for government 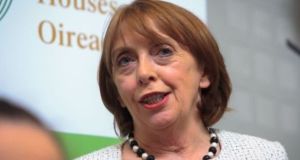 Social Democrats TD Róisín Shortall said the Sláintecare programme had been ‘completely relegated to some point in the future’ in the new programme for government. File photograph: Collins

The programme for government has completely relegated Slaintecare to sometime in the future, the chair of the committee that established the plan for the health service has said.

In a scathing attack on the pledges in the government document Social Democrats TD Róisín Shortall claimed there would not be any additional money for Slaintecare this year or next.

This would result in all momentum on the programme being lost, she warned.

Ms Shortall said the programme referred to plans to “accelerate the implementation of Sláintecare” which sounded good.

But further investigation showed a pledge to examine appropriate funding measures to support it in advance of 2022 and she described that as a “withering commitment” and “just pathetic”.

During a Dáil questions and answer session on the impact of coronavirus on the health service, Ms Shortall said: “After all the work that was done, all the talk, the lipservice that has been paid to it and the fact that every party in this House signed up to Sláintecare as the national public health policy, it now seems to be completely relegated to some point in the future.”

On Tuesday, the Irish Fiscal Advisory Council told the Oireachtas Covid-19 committee that an additional €3 billion a year would be needed to fund the 10-year Slaintecare plan for the future of the health service. The Social Democrats had estimated that it would cost €1 billion annually.

Ms Shortall warned that “if this has been kicked into 2022 or later, all momentum is going to be lost and public healthcare in this country will be set back years and years. It is really disappointing.”

She asked Minister for Health Simon Harris if he had signed off on it.

Mr Harris said he welcomed the commitment in the programme for government to accelerating Slaintecare.

“Acceleration is key,” Mr Harris said and added that “I genuinely believe that many elements of Sláintecare are already funded”.

The Minister said “perhaps this is always the way with programmes for Government, and people may criticise that, but there are not very many areas of the programme for government which have a commitment for additional funding and Sláintecare is one of them”.

He said he hoped Ms Shortall “will acknowledge some of the key reforms we have managed to get into the agreement” and added that they had different views on Slaintecare consultant contracts.

“That has been included, along with regional areas and elective hospitals.”