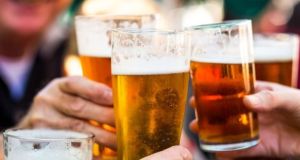 Labour leader Brendan Howlin said there had to be ‘sound, logical, expert reasoning’ around the re-opening of pubs. Photograph: iStock

Eating chicken korma or cottage pie does not give protection against Covid-19, the Dáil was told as the basis of draft guidelines on allowing pubs that serve food to open was questioned.

Concerns were also raised for soccer fans watching a 90-minute match as opposed to supporters viewing a 70-minute Gaelic game after proposals emerged that customers would be recommended to limit their stay in a pub or restaurant to a maximum of 90 minutes.

But Sinn Féin health spokeswoman Louise O’Reilly said women had contacted her to express dismay that “there seems to be very much a concerted national effort to reopen tourism and hospitality, but that there isn’t the same emphasis on reopening and re-starting screening programmes” for cancer.

During a debate on the coronavirus, former Labour leader Brendan Howlin questioned the basis of the pub reopening guidelines.

“Pubs that sell food are going to be allowed re-open and pubs that don’t are not,” he said.

A customer was not allowed attend a pub for 90 minutes unless they consumed food, he said.

“Whether you go in and have your chicken korma or your cottage pie does not give you extra protection against the virus,” he said.

Mr Howlin said “we have to have sound logical expert reasoning”, but he said the move to re-open pubs was “anchored in the intoxicating liquor act of the 1960s” which was “nothing to do with infectious diseases”.

He said an arbitrary figure of € 9 was apparently an updated figure on the five shillings which is in the 1962 Act.

He said “eating food gives you no additional protection”.

Minister for Health Simon Harris acknowledged that “cottage pie doesn’t protect you from Covid-19” but he urged people to await the final guidelines about the possible opening of pubs that serve food and a recommendation that people only stay in a restaurant or pub for 90 minutes.

It was indicated that restaurants could open at an earlier stage because people would be seated and tables could be moved apart unlike the traditional pub environment. Mr Harris said a number of publicans made the reasonable point that they effectively operate almost as restaurants serving food and an effort was made to accommodate them.

He said the relevant agency Fáilte Ireland is engaging with the Health Protection Surveillance Centre.

Earlier, Fine Gael TD Frankie Feighan said a tweet from a Sligo Rovers supporter said “if you’re a Gaelic supporter - 70 minutes - you watch the full game but if you’re a soccer supporter - 90 minutes - in his own words you’re fecked”.

Mr Harris said “unfortunately the virus just doesn’t care really what you’re favourites sport is. The virus is very infectious and can spread.”

But he said “the lower we can get the virus in our country the weaker we can make it” the more options there are for going back to normal life.

“Any measures we bring in are brought in on public health grounds. There has to be a common sense to them though as well.”

The Minister also said plans were advanced for the re-start of the four cancer screening programmes and those dates would be announced at the end of the month.