‘Coalition’ parties to meet Independents as they seek further support 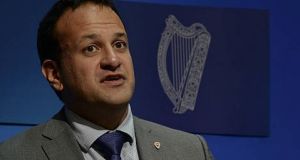 Taoiseach Leo Varadkar: he said he would like to see the new government have at least 90 TDs to ensure its viability. Photograph: getty Images

Independent TDs are set to meet Fianna Fáil, Fine Gael and the Greens as the three parties seek to bolster support for the proposed new administration.

Briefings on the programme for government are being arranged for this week, sources have said, in the hope of luring at least six Independents either into government or to support the government from outside.

Mr O’Donoghue said he would be raising the issue of infrastructure outside of the major cities.

“Ireland’s infrastructure is completely lacking once you leave the city,” he said, adding that he would also raise the issue of experience in the new cabinet.

He said any new Minister needed to have “experience of the sectors they represent”, and that Ministers needed to represent “different geographical areas”.

Galway East TD Sean Canney said “there are a lot of words in that document, a lot of ‘reviews’, a lot of ‘considerations’. But we should not be robbing the roads to pay for something else. We have had a huge deficit in roads development. Some of the roads are not fit for a bicycle.”

Mr Canney said he believed there was nothing to talk about yet as “until the members of each party decide which way they go with it, it is pointless discussing something which may or may not be on the table. The people who brought this document together need to decide what to do with it.”

Taoiseach Leo Varadkar said this week that briefings were being organised for the Independents on the programme for government as he would like to see the new government have at least 90 TDs to ensure its viability.

He said there was “lots in this programme for rural Ireland”.

It is also understood that members of the Green Party have privately expressed concerns about facilitating access to Ministers for those Independent TDs who support the government from the outside.

At a previous meeting with Mr Varadkar some Independents were told they would be given a programme for government when it was agreed, and were left with the impression that they would be supporting an administration from outside.