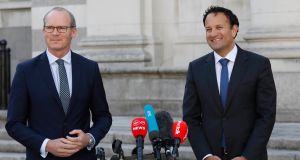 There will be a “political crisis” if members of Fine Gael, Fianna Fáil and the Green Party do not approve the proposed coalition government deal, Taoiseach Leo Varadkar has said.

He said meetings were being organised with independent TDs about the programme for government they had agreed on in an attempt to further bolster support for the would-be government.

Mr Varadkar said he wants the administration to have the support of around 90 deputies. Fianna Fáil, Fine Gael and the Green Party have 84 TDs between them.

The programme is to be put to the membership of the three parties this week with results of ballots on it expected on June 26th.

“If the deal doesn’t go through, well then we do not have a new government and that precipitates a political crisis,” Mr Varadkar said on Tuesday.

Fianna Fáil and Fine Gael supporters are expected to endorse the programme but a Green Party member has warned that convincing two-thirds of its members to do so will be a “very hard sell”.

The proposed deal was last night endorsed by the three parliamentary parties but Green Party member Saoirse McHugh, who unsuccessfully contested the general and Seanad elections this year, said she would not be supporting it when the wider membership votes.

She told RTÉ radio’s Today with Sarah McInerney that she was initially supportive of what was being proposed but on reading the details she thought it was “woolly, management speak” and a lot of it was “quite fudgy”.#

Ms McHugh said the programme does not do enough to address the threat of climate change, which means she will not be voting for it. She said the 7 per cent carbon emission reduction proposed would not be easy to get past members as it was “backloaded”.

“It will be a very hard sell for Green Party members,” she said, adding that a party could be in government but without power.

She said there was no concrete reduction target for carbon emissions in the document and that that proposals on housing fell short of what had been included in some of the general election manifestoes.

The proposed programme, entitled Our Shared Future, runs to nearly 50,000 words and includes pledges to reduce carbon emissions; to measure economic progress in terms of education, health and housing; to provide 200,000 new jobs by 2025; to make 50,000 social houses available; to leave income tax or USC rates unchanged; and a promise to progress to a living wage.

On the commitments to reduce carbon emissions, Mr Varadkar said what is there in “black and white is that it is an annual average of 7 per cent per year, not 7 per cent every year”.

“And that will be broken into two five-year carbon budgets (and) most of the reductions will happen in the second five years,” he said.

Fianna Fáil TD Éamon Ó Cuív said it would be difficult to campaign against the proposed programme for government, but he would be making it “perfectly clear” that he will not be voting for in favour of it.

There were many reasons for his view, he said, but chief among them were “very disappointing” commitments on the Irish language and the lack of mention of the islands.

He said the document will “probably” get through the ratification process and that he would vote for his party leader Micheál Martin to be the next Taoiseach.

“Do I think this government will last? I doubt that very much,” he told RTÉ radio’s Today with Sarah McInerney.

Mr Ó Cuív said the outgoing Fine Gael government, which was propped up by his party, did not deliver and the public had voted for change in February’s election and “wanted Fine Gael out”.

He said Fianna Fáil had a choice to go into power with Fine Gael or Sinn Féin.

“I seriously fear for the party. I reckon the way we’re going there will be two big political parties in the future and one of them will not be Fianna Fáil.”

Earlier, Tánaiste and deputy Fine Gael leader Simon Coveney said the programme is a new template for government which provides a “real signal of hope” for the country. He said the proposed coalition could provide certainty for the State at a difficult time.

Mr Coveney told RTÉ radio’s Morning Ireland the Covid-19 pandemic had shown the State can respond to big challenges and that the proposed programme included a “doubling down” on the commitment to creating a universal healthcare system under the Sláintecare model. He said targets to provide tens of thousands of social and affordable houses could also be delivered.

The Tánaiste told Newstalk Breakfast that the coming together of Fine Gael and Fianna Fáil was like two neighbouring parishes who had been defined by intense rivalry joining forces to form a new team “for the better good”.

Sinn Féin leader Mary Lou McDonald said Fianna Fáil and Fine Gael being back in government together did not reflect the change desired by voters and that he party would provide “the most effective opposition in the history of this State” if the proposed coalition was formed.

She described the proposed programme for government as being “very long, very wordy” and said the content was “vague”.

Fianna Fáil TD Jack Chambers said he was confident his party would see strong support for the programme among its members as the document reflected “core Fianna Fáil values and principles”.

He said he respected that “certain people will have a view” on it but that he had engaged with many party members on the issue and was confident there would be strong support for it.

His colleague Barry Cowen TD told RTÉ’s News at One that the general election had not yielded a great result for Fianna Fáil but the party had worked with others to compromise and put together a plan.

“We’re not going to sit back and wallow in negative pessimism,” he said.

The Taoiseach was also asked if he would appoint a gender balanced Cabinet on Fine Gael’s side and said he was not in a position to give any guarantees.

“What I can say, of course, when it comes to making appointments, if I am in a position to make appointments, of course I will have regard first of all always to ability because that’s the most important thing but also the need for generational change, for gender balance and also greater geographical balance.”

Mr Cowen said he had faith that party leader Micheál Martin would appoint a credible cabinet - including females.

“We will continue to help in any way to encourage people into politics. We have an open door.”