Doherty defends party policy on pensions after members retire with pots of up to €1.72m 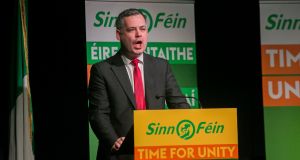 Sinn Féin has defended its approach to pensions as it emerged that four of its TDs will retire from the Dáil with pension pots varying from €495,000 to €1.72 million.

Finance spokesman Pearse Doherty insisted that his party would reduce the salaries of TDs and ministers and the pensions that would be available to them on retirement.

Mr Doherty said the party would prevent TDs drawing pensions early, “that people should only be able to receive their pensions at full retirement age”.

Other parties did not support its initiative because “they are not there for ordinary working people”, he claimed.

“They voted to increase the pension age for ordinary workers while allowing a section of TDs to draw down full pensions at the age of 50.”

He said his party had gifted money back to the State in the past. “We haven’t accepted any of the increases that we’ve seen over the last number of years.”

Mr Doherty added that he had also given back about €9,000 to the State, something he had not previously made public.

He was responding to the revelations of substantial pension pots of retiring TDs including the party’s four deputies who are not running for re-election and who will receive annual pensions ranging from €26,000-€46,000 a year and lump sums of €63,000-€140,000.

Mr Doherty was asked about his party colleagues’ pensions as he launched a series of proposals worth more than €3 billion to put money back in workers’ pockets, including a pledge to bring the retirement age back to 65; to increase the State pension by €20 over a government term; end USC payments for the first €30,000 of all incomes; abolish the property tax and the 5 per cent levy imposed on every insurance policy premium which he described as “immoral”.

Former taoiseach Enda Kenny has the largest pension pot of €3.25 million and an annual pension of €46,800.

Mr Doherty said of the pension revelations that “this is the system that currently exists”. The first piece of legislation he introduced as a TD was to cut the pay for TDs, ministers and officeholders, he added.

“And Sinn Féin are committed to do that if we get into government.”

Sinn Féin’s proposal to abolish the USC for the first €30,000 of salary would cost €1.2 billion while ensuring that everyone has the right to retire at 65 would cost €368 million, the party says. Increasing the State pension by €20 a week would cost €750 million.

Mr Doherty insisted that their proposals were absolutely affordable as there was a €1.4 billion surplus and their measures had been fully costed by the Department of Finance.

He said employers’ PRSI should increase by 4.5 per cent for the portion of employees’ salaries above €100,000. It was not about shrinking the tax base but rebalancing it.

The Donegal TD said there were areas of the economy that had gone untaxed including the banks, vulture funds and property developers.