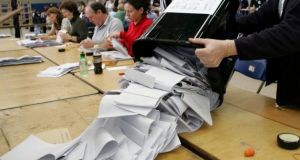 The electoral register is updated each year with all those who registered in the previous 12 months. File photograph: Cyril Byrne/The Irish Times

Today is the final day to register to vote for people who wish to cast a ballot in the upcoming general election, with the deadline being the close of business in local authority offices.

If you are not already on the electoral register, you can be added to the supplementary register, but your application must be received 15 days before polling day (not including Sundays or public holidays), which is Wednesday.

In order to be included on the supplementary register, a RFA2 form must be downloaded online and then brought to a Garda station, along with photo ID. The form must be signed in the presence of a member of the force who will then stamp it, and then it must be delivered to the relevant local authority.

As the deadline is close of business on Wednesday, which is in most cases 5pm, you will have to bring your signed form in person to the local authority office rather than post it.

The electoral register is updated each year with all those who registered in the previous 12 months. There was controversy over the chosen date of the general election, 8th February, as the register is not due to be updated until the following week on 15th February.

This led to concerns thousands of people who had registered to vote through the normal route over the past year, in particular before the local and European elections last May, would not be eligible to vote in the general election.

Those in doubt can visit checktheregister.ie to see if their details are included on the 2019-2020 electoral register.

Voters whose details are not listed are advised to contact their local authority and to see if they are already on the supplementary register of electors. If not they have until the close of business on Wednesday to register.

In recent days, about 2,000 students across several colleges and third-level institutions registered to vote in the upcoming election, according to the Union of Students in Ireland (USI).

On Tuesday, Dublin City Council offices stayed open late until 7pm to allow people to register, and local authority staff in the Wood Quay office will be on hand until 5pm on Wednesday.

Before the dissolution of the Dáil, the Government approved draft legislation to overhaul the voter registration process, to modernise the system with a rolling register rather than one updated annually.

The legislation proposes changes to the identity verification process as well as an online registration system.

Meanwhile, a disability advocate has described to lack of access for wheelchair users in 63 polling stations around the country as “apartheid in another form”.

Ciarán Delaney, who conducted a survey of accessibility of polling stations, found that 18 in Limerick, 16 in Donegal and 10 in Kerry were inaccessible.

There is a legal obligation under the United Nations Convention on the Rights of Persons with Disabilities, which Ireland recently ratified, to ensure that everyone has ease of access to vote, he told Newstalk Breakfast on Wednesday.

“There is no excuse in 2020. This is something that has been obvious for some time. It should not be beyond the ability of returning officers to make polling stations accessible,” he said.

Mr Delaney pointed out that during the recent election in the UK, portacabins with wheelchair ramps were used at polling stations where necessary to allow access for wheelchair users.

At present if a wheelchair user turns up to vote and finds the polling station inaccessible they have to speak to the returning officer and then “toddle off” to a different accessible polling station, Mr Delaney said.

This was the same as telling members of other minority groups that they could not enter a polling station, he said.