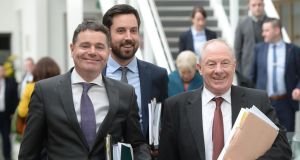 A new extended Metro and significant Dart extension costing a total of €5 billion and to be completed within in a decade, form the key part of the Government’s new €116 billion capital development plan.

Some €3 billion will be spent on a revamped and extended version of the previous Metro North project will be developed in tandem with a €2 billion upgrade to the existing Dart system in a major upgrade of Dublin’s rail network.

Both projects, announced on Friday as part of the Government’s capital development plan for the next ten years, will be completed by 2027.

The main points of the infrastructure plan can be read here

Both projects, announced on Friday as part of the Government’s capital development plan for the next ten years, will be completed by 2027.

The Cabinet formally signed off on Friday on a strategy to map Ireland’s development being cast as “Project Ireland 2040”. It comprises two reports; The National Planning Framework (NPF) will decide how to achieve balanced regional development.

The second report is the National Development Plan (NDP), a 10-year, €116 billion programme to upgrade the State’s infrastructure in anticipation of the population increase.

Launching the plan in Sligo IT on Friday Taoiseach Leo Varadkar said: “Now we can afford to invest again.”

He said “long term planning is the cornerstone of good government”.

Reacting to the plan, Fianna Fáil spokesman on public expenditure and reform Dara Calleary, said it was an exercise in repackaging previous schemes, and claimed 179 earlier projects, and over €40 billion in funding, had simply been rolled in.

“Today’s launch is nothing more than a major marketing campaign,” he said. “[IT] looks good on paper, but the real test is in the delivery,” he said.

In a change from previous announcements on the Dublin metro plan, it is envisaged there will not be a transport hub in St Stephen’s Green.

Instead, the metro run underground through Dublin city centre, with a tunnel from Charlemont in south Dublin to north of the airport - a much longer subterranean route than initially envisaged.

Once the metro comes above ground at Charlemont it will run to Sandyford, before reverting to the Luas Green Line tram system.

The Green Line will continue to exist between Cherrywood and Sandyford, and also between the city centre and Broombridge.

The existing Green Line will continue to function while the Metro is being constructed under large portions of its route.

All very poetic in @itsligo at @Ire2040 launch. Important to see past the rhetoric & read the actual plan. Some changes to earlier draft but many weaknesses remain. Land Agency & Climate Change mitigation proposals interesting but more detail needed.

The current proposed route for the metro will see it cross the Liffey west of the Luas cross city line.

“Metro Link will provide faster, reliable journey times to and from these key destinations while also offering interchange with other rail, Dart expansion and light rail services.”

The Dart upgrade will see commuter lines to Drogheda, Dunboyne, Maynooth and Celbridge electrified. The Phoenix Park tunnel will also be used for high capacity commuter services, the report says.

There will also be investment in rail fleet upgrades, re-signalling and station changes to “provide expanded services”.

“This integrated rail network will provide a core, high capacity transit system for the region and will deliver a very substantial increase in peak-hour capacity on all lines from Drogheda, Maynooth, Celbridge/Hazelhatch and Greystones,” the document says.

Luas lines will eventually be extended to Finglas and Bray, although any new Luas lines will not begin construction in the lifetime of this plan, which expires in 2027.

So-called “BusConnects” schemes will be rolled out in Galway, Cork and Dublin. The upgrade of these bus networks will cost €200 million in Cork and Galway and €2 billion in Dublin. A €1 billion rural regeneration fund will be established and there will be a €2 billion urban regeneration fund.

Both the Planning Framework and the infrastructure Development Plan are part of “Project Ireland 2040”, which covers significant spending in transport, health, education and measures to tackle climate change, as well as outlining where future population growth should be.

The overall plan also includes significant investments in bus transport, cultural and education projects and health, with plans to move the Coombe, Rotunda and Limerick maternity hospitals to new premises.

One of the main goals of the overarching strategy will be to drive growth in urban centres around the country to deal with projected future population growth of a million people by 2040.

Almost half of all houses must be constructed in cities, towns and villages, according to the plan.

“The target is for 40 per cent of all new housing to be delivered within the existing built-up areas of cities, towns and villages on infill and/or brownfield sites,” the planning framework document states.

It is understood, however, that this target will increase to 50 per cent in Dublin county and even further for the areas of the capital either within or close to the M50 motorway around the city centre.

The regional roads network will be allocated €7.3 billion, including further development of the A5 motorway to Derry.

Investments in enterprise, innovation and skills programmes take up €9.4 billion of the plan.

This includes a €500 million “disruptive technologies infrastructure fund”. From next year, it will encourage the development of new technologies in healthcare, financial services, energy and food production, and business services. Businesses will have to compete for this funding.

The third level sector will be given €2.2 billion for infrastructural projects, with €4.3 billion going towards airports and port to fund projects such as a second runway at Dublin Airport.

Of the total €116 billion in the infrastructure plan, €91 billion will come directly from the exchequer, with the remainder funded by the commercial semi-State sector.

Overall, the plan seeks to increase the amount of money spent on infrastructure from 2.9 per cent of gross national income now to 4.1 per cent in 2027.

The National Planning Framework also designates Sligo as a regional centre for the north west with Athlone fulfilling the same role for the midlands.

Examples of areas that could benefit from this fund, the plan says, include Cork Docklands, Limerick regeneration projects, the Waterford quays and Galway city centre regeneration.

A €1 billion culture fund will drive investment in institutions such as the National Museum, the National Library and the Crawford Art Galler.

Government sources have said the plan should be followed by successor governments if Fine Gael loses office, although those on the Opposition benches have claimed they will not be bound by its recommendations and have the right to make changes.

A new National Regeneration and Development Agency will seek to build land banks, particularly so-called “brownfield” sites that have previously been used for commercial and industrial purposes, to ensure greater house building in urban areas.