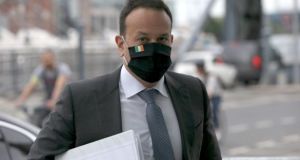 Tánaiste Leo Varadkar insisted that all the “salient details” of the contract were already in the public domain. Photograph: Stephen Collins/Collins Photos

Sinn Féin has accused Tánaiste Leo Varadkar of changing his story about the leak of the agreement with GPs, alleging that his explanation for his actions was now “in tatters” during testy exchanges in the Dáil this afternoon.

Sinn Féin finance spokesman Pearse Doherty questioned Mr Varadkar on recent disclosures under the Freedom of Information Act which showed that senior health officials were strongly opposed to the publication of the document which Mr Varadkar, who was then Taoiseach, sent to his friend Maitiú Ó Tuathail in April 2019.

Dr Ó Tuathail was then head of a GPs’ group set up to rival the Irish Medical Organisation, which had negotiated the new agreement with the Government.

Mr Doherty questioned the Tánaiste about where he had got the document that he sent to Mr Ó Tuathail. Mr Varadkar had previously said in the Dáil that his adviser had requested a copy of the document from the Department of Health.

However, Freedom of Information requests from Sinn Féin revealed no record of a request from the Taoiseach’s office for a copy. Mr Varadkar told the Dáil today that his adviser already had a copy, which she provided to him.

Mr Doherty said the FOI documents showed that the Taoiseach’s defence of his actions in November was now “in tatters”.

Mr Varadkar repeated his apology for the leak, but said that Mr Doherty was trying to “reheat an old political controversy by going over old ground”. He said “the House heard about this and voted on this last November.”

Mr Varadkar insisted that all the “salient details” of the contract were already in the public domain when he sent the document to Dr Ó Tuathail. He said his motivation was to convince the National Association of General Practitioners to back the deal, which it did.

“The office of an Taoiseach was used to pull a stroke for a friend,” Mr Doherty said.